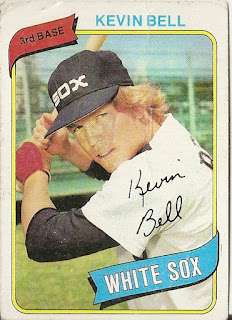 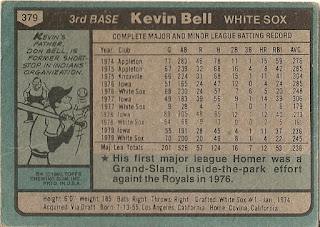 The Hot Corner was up in the air on the South Side as 1980 began. Despite earning an extended look at the end of the 1979 season, Kevin Bell found himself in a Spring Training competition for the job with Alan Bannister. Ultimately, Bannister was named as Opening Day starter, but Bell ended up starting and appearing in the most games at third for the Pale Hose. His struggles at the plate kept the position opened all season as manager Tony LaRussa started six different players at third in 1980. Bell even went so far to consult an hypnotist to help him out of his season-long slump. Bell batted only .178 with one home run during the season and was eventually released in December.

A California native whose father was a minor league player, Kevin Bell was an outstanding high school and college player that was a #1 draft pick by the White Sox in 1974. He was sent to Appleton, Wisconsin, which in time would become his home state, meeting his future wife Bonnie, a Wisconsin resident.

Eventually, he made it to the Major Leagues in 1976, apparently after a trade with the Baltimore Orioles to bring Brooks Robinson to Chicago fell through. Given the third base job, Bell would appear in 68 games, the highlight being and inside the park grand slam in his seventh major league game. It appeared that Bell would be in the White Sox' long term plans, but the acquisition of Eric Soderholm (along with several others that would become the South Side Hit Men) led to Bell starting the year in the minors. When he returned, a devastating knee injury slowed his progress, taking almost two years to return to his full strength.

After the 1980 season, the Padres signed him as a free agent, but he did not appear in a Major League game in 1981. Traded to the Oakland A's. before the 1982 season, he appeared in three games in a late September call up before the right handed hitting Bell ended his six year big league career.

Bell relocated to the Wisconsin area where he has remained since the mid-1980s as a business consultant for US Venture, in the AutoForce division. In 2001, he was inducted into the Appleton Hall of Fame.

What I love about this card
When I was in Little League there was only one way to hit a home run: Inside the Park. The fences were way too far away in the parks we played in, so our only chances were to hit one over the outfielders heads (usually the opposite way). It helped if you could run fast and if someone missed the cutoff man (which they usually did). Seeing Bell's greatest feat recognized on the back of is 1980 card gave credibility to all of us Little Leaguers everywhere.

Something else...
The TV announcer for the White Sox during the 1980 season was none other than Harry Caray. More known for his time with the Cubs, Caray began his tradition of singing "Take Me Out to the Ballgame" on the South Side. The "Nancy" that he refers to in this clip is Nancy Faust, the longtime organist at Comiskey Park. It is also from the game in which Kevin Bell hit his only home run of the season, against the Indians on August 18, 1980: