The All Star Game is quite possibly my favorite part of the baseball season. As the first half of the 2016 baseball season comes to a close today, I was thinking about All Star Games past, specifically, the 1980 edition that was held at Dodger Stadium in Los Angeles. It was special because it was the first one that I was able to stay up and watch complete. I was nine years old.

In those days, there was no Futures Game, no Home Run Derby. It was the game and the game itself. It marked the halfway point for most of us during the summer and at least in my neighborhood it was an truly an event. It was marked by promotions during the spring and summer (via Pitch, Hit and Run and the All Star Ballots) and was a marked event in TV guides (remember those)? 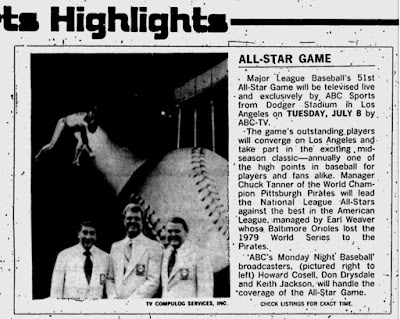 The 1980 game was broadcast on ABC, then in their fifth season of televising Major League Baseball. It was their third ASG broadcast (the others coming in 1976 and 1978). All the heavy hitters were present: Keith Jackson, Al Michaels, Don Drysdale, Bob Uecker and the irrepressible Howard Cosell. Cosell, of course, was the polarizing figure and voice of Monday Night Football. His impact is largely forgotten today, but his presence at a sporting event definitely made it "must see."

In the years that have passed since, I have often wondered about how things have changed. The All Star Game has become niche programming, available really for those who want to see it (and judging by the ratings that's debatable).

I wonder if back then the All Star Game was more special because of the mystery that surrounded it. For clarification, many of these players I did not see regularly, if at all on television. Of course, the technology is almost archaic by comparison, but consider what a baseball fan had as options in 1980:

NBC carried the Saturday afternoon "Game of the Week"

ABC carried "Monday Night Baseball" during the summer months and periodically carried "Sunday Afternoon Baseball" in the fall to go head-to-head against the NFL and highlight in-demand pennant race games.

That's pretty much it. ESPN was not in every home as of yet as it was still new and most folks didn't have cable TV back in 1980. At least I didn't. The extent of our technology was making up games/stats/leagues using this:

For example, I lived in Detroit. Here is advertisement in the 1980 Tigers Yearbook. I loved this ad with the Tiger eating the logo of the other teams in the American League: 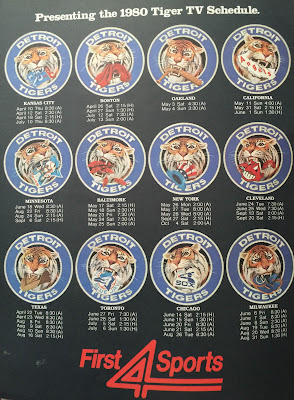 And this was pretty much their coverage:

No replays from a hundred angles. No over-analysis. No screen clutter with multiple graphics.

Today, we are accustomed to seeing every game televised live. If we miss it, we can still see it on-demand, or several other forms of media. In 1980, there were 52 games available and that's it. And we were happy to get that many. If you notice, most were road games, so there was very little coming directly from Tiger Stadium.

But back to the All Star Game and it's sense of mystery. We saw the stars of the American League, but the National League was foreign territory. We were NL starved. Consider that they won the darn game every year and it made it that much more intriguing. Yes, we read about them and even saw clips on "This Week in Baseball" but that was just about it.

So while I settle in this week to get my fill and enjoy all of All Star coverage both televised and on the web, there is part of me that will recall another, simpler time that made me appreciate the game as much as I do today.
Posted by Dean Family at 8:05 PM