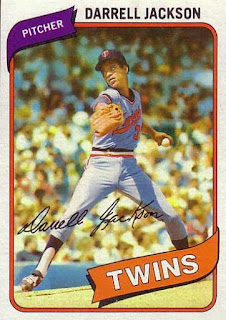 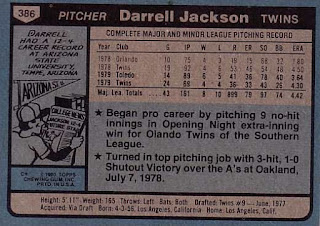 Who is this player?
Darrell Jackson, starting pitcher, Minnesota Twins

As the 1980 season began for the Twins, Darrell Jackson was originally not in the starting rotation, narrowly losing out the #5 spot to Terry Felton. Felton's early struggles led to an opportunity for Jackson and he responded with a solid first half of the season, highlighted by a 5-1 mark in June. Jackson's first victory was a season highlight and came courtesy of a 10-inning performance against New York at Yankee Stadium on May 10th. While he struggled a bit over the summer, Jackson finished the season strongly, finishing 1980 with a 9-9 record and a claim on one of the spots in the Twins starting rotation. Below is the 10th inning of the aforementioned game at Yankee Stadium:


Darrell Jackson is a success story.

Not because he was part of a cradle of baseball excellence in Southern California and was high school teammates with future Hall of Famers Ozzie Smith and Eddie Murray.

Not because he was a member of a loaded College World Series championship team in 1977 at Arizona State University. Several members of this team would become major league players, including future All Stars Bob Horner and Hubie Brooks.

Not because of his minor league performances which saw him pitch 9 innings of no-hit ball in his first professional start and quickly move his way through the Twins system, making his major league debut at 22 years old.

Not because of his success at the major league level which saw the lefthander win 20 games in his short five year career, out-dueling future All Stars such as Jack Morris, Dave Stieb and Mark Fidrych.

And not because he very publicly entered an alcohol rehab program in early 1981 and gained assistance from former major league pitcher Don Newcombe.

Darrell Jackson is a success story because after a shoulder injury along with substance issues hastened his exit from the game, Jackson has spent the remainder of his life giving back, providing education and guiding others to a better path.

Today, Jackson provides the benefit of an example to the youth of his hometown over the course of the last three decades. Clean and sober for 30 years, Jackson went from using marijuana and drinking regularly to creating the 10-20 Club Inc.  Using the mission statement: Helping Youths Help Themselves, the Club provides a series of programs all designed to make a difference. A generation of youth owe a debt of gratitude to Mr. Jackson and his efforts in making the world a better place.

Why I love this card
I have mentioned numerous times my preference for action shots and Jackson's card fits the bill. I'm pretty sure that this shot is from Yankee Stadium. Jackson pitched in day games at there in both 1978 and 1979, but with Topps tendency to use text from the player's 1978 season over 1979, I'll assume that this shot is from this game.

Something else...
Jackson went 10 innings not once in 1980 but twice. On the second occasion, Jackson hooked up with Mike Norris of the Oakland A's in a pitcher's duel. Norris was in the middle of his finest season and defeated Jackson in 11 innings by a score of 2-1. Norris went all 11 innings and Jackson went 10. Norris was 25 years old and Jackson was 24. I can't imagine in this day and age, any pitcher, let alone a young pitcher, being allowed to log that kind of work load during a regular season game.
Posted by Dean Family at 11:01 PM