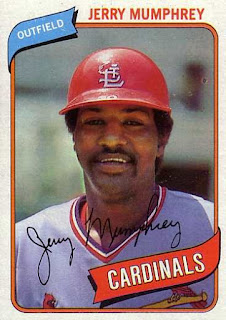 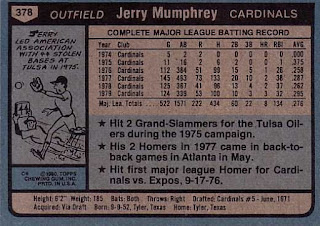 Who is this player?
Jerry Mumphrey, outfielder, St. Louis Cardinals

By the time kids were pulling this card from packs in 1980, Jerry Mumphrey had already been traded twice since he was pictured as a member of the St. Louis Cardinals. First, he was sent to the Cleveland Indians in December 1979 as part of a trade for Bobby Bonds. Then, shortly before Spring Training began, Mumphrey was traded to the Padres. With San Diego, Mumphrey settled in as the Padres' centerfielder, playing in a career-high 160 games and having personal bests in outfield putouts, assists, plate appearances and base hits. He also teamed with Ozzie Smith and Gene Richards as becoming the only three teammates in Major League history to steal 50 or more bases in a single season. Mumphrey in particular was effective with his base running, being caught only five times and placing second in stolen base percentage with 91%

Jerry Mumphrey was popular during his career with teammates, the media and with fans. Accordingly, much has been written about him over the years, including a comprehensive biography by the people at SABR. For this post, we decided to include some video of Mumphrey over the years:

1978: With the Cardinals, earning a walk in the 9th inning of Tom Seaver's no-hitter:


1981: One of his finest performances on a national stage, Game 2 of the 1981 ALCS, where he had four hits in a 13-3 Yankee victory. Mumphrey's fourth hit set a record at the time for most hits by a team in a LCS game:


1984: Representing the Astros in the All Star Game. Mumphrey had been traded to Houston during the 1983 season despite batting over .300 in the previous two seasons as a Yankee.

1986: Traded to the Chicago Cubs, Jerry spent the final three seasons of his 15-year major league career in the Windy City:


In retirement, Jerry returned to his home state of Texas. Any update on what he is doing today would be most appreciated.

Why I love this card
My dad grew up near Pittsburgh, Pennsylvania. That made me a very impressionable Steelers fan at the time their dynasty was in near it's end. Mumphrey's card indicated his place of birth as Tyler, Texas. Immediately, I thought of (and feared) the great Houston Oilers running back Earl Campbell. To this day, I can still hear John Facenda's voice: "Earl Christian Campbell.....The Tyler Rose." I had always wondered if Mumphrey and Campbell knew each other. What 10-year old sports-obsessed fans think about....

Something else...
When Mumphrey began his professional career, he played rookie ball with a fellow 18-year old catcher/first baseman known as Randy Poffo. Poffo would go on to attain greater fame as professional wrestler, Randy "Macho Man" Savage. I love the baseball reference the Macho Man channels in this clip: