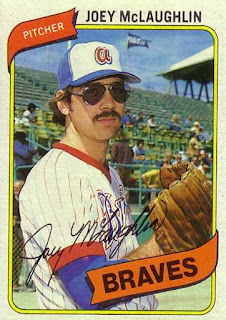 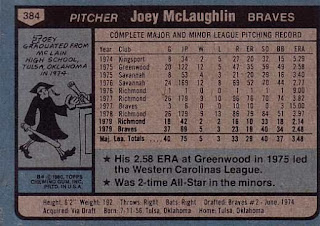 Who is this player?
Joey McLaughlin, relief pitcher, Atlanta Braves

Coming to a team that had the worst bullpen in the majors the previous season, anticipation was high when Joey McLaughlin arrived in Toronto for the 1980 season. Seen as the key piece to the Chris Chambliss trade, McLaughlin earned this acclaim by way of his solid rookie season with the Atlanta Braves in 1979. The Blue Jays, however, were a terrible team at this point,  losing 95 games and finishing last in the AL East. McLaughlin had a difficult year, primarily due to control issues, with his best stretch coming in during June that saw him lower his ERA by nearly a run and a half. He was moved to the starting rotation near the end of the season, which saw him split his four decisions.

A right-handed high school star pitcher and football player out of Tulsa, Oklahoma, McLaughlin was drafted by the Atlanta Braves in 1974. He was tabbed by former major league hurler Bob Veale as "the Braves future" as he worked his way up the Braves ladder. He would make his major league debut in 1979. Here is a video of him a month into his major league career, pitching against the Cubs on July 10, 1979:


After a rough 1980 season, McLaughlin settled in the Jays bullpen as the team slowly started to improve. He led the team in saves with 10 in 1981, and transitioned into more of a situational specialist when Bobby Cox took over the team. He in time established himself as a dependable, if not excitable relief pitcher that relied on his out-pitch, the knuckle curve.

Here is a clip of McLaughlin talking about the pitch on Opening Day, 1983:


However, 1983 would be a frustrating season for McLaughlin and the Jays and he was perhaps unfairly singled out by the boo-bird fans for the Jays late-summer fade. Nonetheless, the Jays made a move to obtain Dennis Lamp in their bullpen and McLaughlin's time in Toronto was coming to an end.

Toronto released Joey in May of 1984 but within a week he caught on with the Texas Rangers for the rest of the season. Although he would spend three more years in the minor leagues waiting for a call to return, 1984 would be the final major league season of McLaughlin's seven year major league career. He would earn 29 wins, 36 saves and appear in 250 major league games.

Since he left the majors, McLaughlin has enjoyed his retirement, assisting in the careers of his son's who followed a baseball path and as a coach in youth baseball. These days, he enjoys the company of his family and grandchildren in the Oklahoma area.

Why I love this card
Any player sporting sunglasses on a baseball card has to be cool. Nothing more.

Something else...
For no other reason than it is out there, here is a photo of the fun-loving McLaughlin during Spring Training 1984 getting his eyes tested for depth perception. Granted, not as cool as the sunglasses, but still... 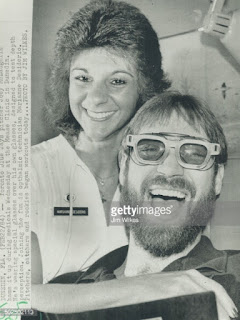