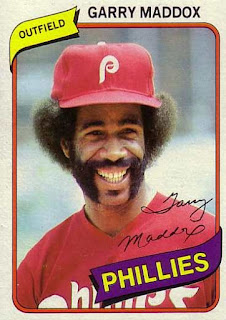 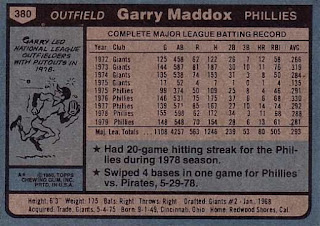 Who is this player?
Garry Maddox, centerfielder, Philadelphia Phillies

The 1980 season was one of redemption for the Phillies' Garry Maddox. After failing for three consecutive years in the postseason, Maddox was at times a symbol of that frustration. When the year began, there were some question marks that surrounded the Phillies. While not as solid offensively as years past, Maddox was very reliable in center field and at the plate, especially down the stretch in September. Garry earned his sixth Gold Glove award in 1980 as Philadelphia advanced to the World Series for the first time in 30 years, winning their first World Championship. Maddox was instrumental in leading them there, primarily in the NLCS where he was lifted on the shoulders of his teammates.

Garry Maddox did not take the traditional route to baseball stardom, instead he first served his country in US Army in Vietnam after what he termed his "disallusionment" with organized baseball. He returned home after his father suffered three heart attacks and his family (eight siblings) needed assistance. He was allowed out on the condition that he have a job. It was then that Maddox turned back to baseball.

The Giants, though, held Maddox's rights after his time in the service, and he was given a look. In 1971, he became the only player in California League history to go 6 for 6 in a game twice. That got the attention of the parent club and he was in the Bay Area within a year's time. Named to the 1972 Topps All Rookie team, Maddox was doing very well for a 22-year old that was saddled with the pressure and responsibility of being Willie Mays' replacement in center field for the Giants.

The following year, he was the third best hitter in the league, with a .319 batting average. Within 18 months, however, the Giants had dismantled much of their young core of talent, shipping away several future All Stars such as Dave Kingman and Gary Mathews. Maddox was traded to the Phillies in May of 1975, where his career and reputation began to blossom.

He would be known in Philly as the "Secretary of Defense," and that he was responsible for the third of the earth that wasn't covered by water. Garry would quickly become a fan favorite, earning raves for his defensive prowess and explosive bat. He would win eight Gold Gloves in a Phillie uniform and helped lead them to the postseason six times in an eight year period (1976-1983). He was a regular on "This Week in Baseball" for his defensive gems, well before the instant highlight era of today.

He would have highs and lows throughout, as evidenced in 1980, but he is also known for this; in the 1978 NLCS:

And this, his home-run in Game 1 of the 1983 World Series that was the Phils only win of the Series:

And this, his home-run in Game 1 of the 1983 World Series that was the Phils only win of the Series.

Garry walked away from the game in April 1986, spending 15 seasons in the major leagues, but he had spent several years preparing for the next stage in his life. He has been involved in numerous charitable and civic causes in the City of Brotherly Love, served on the board of the Federal Reserve bank of Philadelphia and is the CEO of A. Promerantz & Company, a multi-million dollar furniture company.

Why I love this card
I knew nothing of the famous Oscar Gamble card or afro in the summer of 1980. Maddox's card was the next best thing for me. I found his facial hair, afro and huge smile positively compelling. Even now, this card still makes me smile. What I never knew was that exposure to chemicals in Vietnam left his skin highly sensitive, and he has always worn a full beard to protect his face. In fact, the Phillies had to waive their clean-shaven rule to accommodate Maddox.

Something else...
I know that this was posted before, but it is too good not be posted again. Here's Maddox as part of a singing quintet with Larry Bowa, Mike Schmidt, Greg Luzinski and Dave Cash.