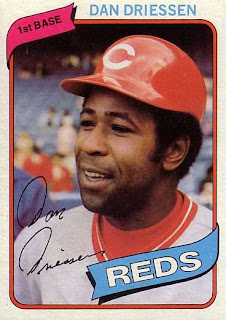 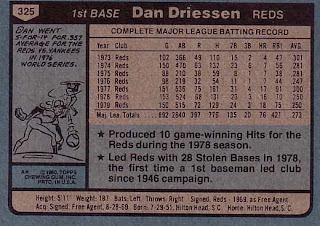 Who is this player?
Dan Driessen, first baseman, Cincinnati Reds
As the regular first sacker of the defending National League West champions, Dan Driessen had a secure position with the Cincinnati Reds. The left-handed hitter had established a reputation as a steady performer with a reliable glove. He began the 1980 season slowly, but batted .345 in May and raised his batting average to .291 by the All Star break. The Reds remained in contention for much of the season before finally fading after Labor Day and Drieseen led the NL in walks and was fifth in on-base percentage.

A native of Hilton Head, South Carolina, Driessen's path to the major leagues was not a traditional one. Driessen never played on his high school baseball team, primarily because his school didn't have one. He cut his baseball teeth on the South Carolina sandlots playing with men's semi-pro teams. The locals contacted major league scouts about the young spray hitter and he was given a tryout and impressed the Reds' brass, who signed him to a contract in 1969. He feasted on minor league pitching and earned a major league promotion in 1973.

Almost instantly, Driessen was hailed as the next star hitter for the Big Red Machine. His .301 average in 102 games earned him some Rookie of the Year consideration and the Reds tried him full-time at third base in 1974. He was a solid performer in his early years with the Reds, but the general perception was that, if given the chance to play regularly, Driessen could be a star. Driessen enhanced that reputation in 1976 when, as the first designated hitter in World Series history, he batted .357 in a four game sweep of the Yankees.

This prompted the Reds to trade veteran Tony Perez prior to the 1977 season, enabling Driessen to take over first base, full time. Driessen paid immediate dividends, batting .300 with 17 home runs and 91 RBIs. He would hold the down position for seven years, helping the Reds win the NL West in 1979 and the best record in baseball during the strike-shortened 1981 season. During that span, Dan would three times lead NL first basemen in fielding percentage but eventually became the subject of consistent trade rumors.

Shipped to Montreal in 1984, Driessen became a part-time player for the remainder of his 15-season career. From there, he went first to San Francisco, then Houston and finally St. Louis. He even spent time in the minor leagues in 1986 and 1987 to work his way back. When Jack Clark was injured late in the 1987 season, Driessen was inserted as his replacement in the NLCS and World Series. It was a nice comeback story despite the Cardinals seven-game loss in to the Twins. Today, Driessen remains in South Carolina as a high school coach. He is the unlce of former Major Leaguer Gerald Perry and the cousin of Reggie Kinlaw, an NFL nose-guard for the Oakland/Los Angeles Raiders.

Why I love this card
Much like the Tom Hume card, here is a shot of a Cincinnati Red at Detroit's Tiger Stadium. As I mentioned in the Hume post, seeing a National Leaguer pictured an AL park in the days before interleague was a big deal. The Reds and Tigers played each other in an annual exhibition called the Kid Gloves Game where the proceeds would go to Sandlot baseball in Cincinnati and Detroit. This shot of Driessen was taken before the April 23, 1979 game in which the Tigers beat the Reds 14-3.

Something else....
In other time when I enjoyed the nicknames Chris Berman would periodically throw out in the early days of ESPN, I admit that I always liked Dan "Salad" Driessen. I even said it to myself when I saw he was the next card for this blog.
Posted by Dean Family at 9:45 PM