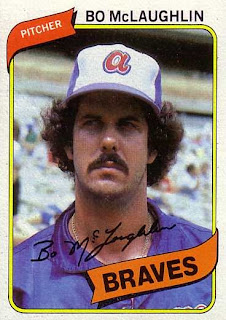 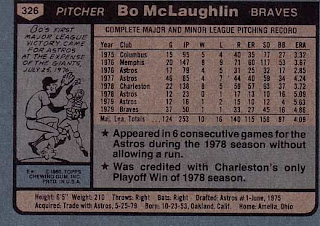 Who is this player?
Bo McLaughlin, relief pitcher, Atlanta Braves
Interestingly, Michael Duane "Bo" McLaughlin did not appear in a major league game in 1980 despite appearing in a career-high 59 games the previous year in split duty between the Braves and the Houston Astros. He was philosophical when he was sent to the minors shortly before the season began, even when some of his teammates were not so gracious. Bo dutifully reported to Triple-A Richmond where he was utilized as a starting pitcher until injuries to his neck cut short his season.

McLaughlin was born in Oakland, California but attended high school in Batavia, Ohio. He excelled as a high school athlete and was offered 55 baseball scholarships and seven basketball scholarships. Bo chose Limpsomb University in Nashville, Tennessee because of its integrity and emphasis on baseball. He spent three years in college and represented the United States in the World Games in 1974. Shortly thereafter, he signed with the Houston Astros after they selected him in the 1975 amateur draft.

In his first professional game, McLaughlin pitched 6.2 no-hit innings at Double-A and established himself as a major league prospect. He made his major league debut in 1976 and fashioned an impressive 2.85 ERA in 17 appearances with the Astros. He split time between the bullpen and rotation the following season, but his ERA rose nearly two full runs. When he started the 1978 season poorly he shuttled between the majors and Triple-A before being traded to Atlanta during the 1979 season.

Bo became a free agent and in 1981 moved on to the Oakland Athletics who won the AL West that season. McLaughlin's season was derailed by a horrific injury in which a ball batted by Harold Baines hit him squarely in the face. Traveling at an estimated 125 MPH, the ball broke his cheekbone and eye socket. He had to endure two surgeries and there was some concern that he would not survive. The 1981 Players Strike enabled Bo to recuperate and he returned to the A's later that season. Understandably though, he was unable to completely get into pitching shape and 1982 was the final year of his six-year career.

McLaughlin spent three years in the minors attempting to come back, but his heart was never truly in it. He moved to the Phoenix area and began a baseball school and real estate company. He returned to baseball in 1992 at the request of Jim Lefebvre, then-manager of the Chicago Cubs. For the first time in seven years he pitched batting practice and then began his second career as a coach with the Chicago Cubs, Expos and Orioles. Most recently, he has been the roving pitching instructor with the Colorado Rockies.

Why I love this card
What I recall about this card was not anything related to baseball. I didn't have WTBS yet, so the Braves did not resonate with me. There was nothing about the card that jumped out at me, nor anything on the back. No, what got me was "Bo." Before all the "Bo Knows" hype, the only Bo (other than this one) that I knew or cared about was this one: 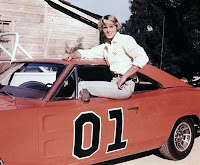 Yes, I watched. Every Friday night. I've admitted to worse.

Something else....
McLaughlin goes into a little more detail about the injury here. It's very interesting to read how it effected Harold Baines as well has how their two paths would cross again nearly two decades later.
Posted by Dean Family at 1:15 PM