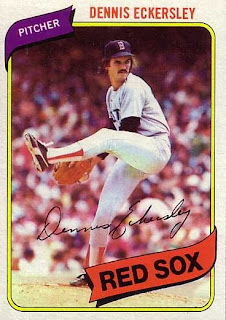 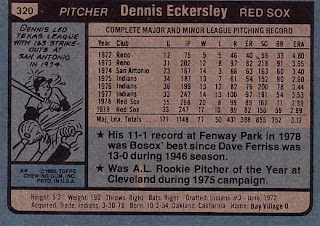 Who is this player?
Dennis Eckersley, starting pitcher, Boston Red Sox
Hall of Fame, Class of 2004

Only 25 years old during the 1980 season, Dennis Eckersley was already in the midst of his sixth big league season. He was the Red Sox Opening Day starter, but began the season with back pain suffered a five game losing streak. He still managed to make 30 starts, including a one-hitter in the next-to-last appearance of the year. True to his nature, "Eck" made no excuses for his inconsistent performance and despite finishing the year with a losing record, he considered one of the bright young pitchers in the major leagues.

Hailing from northern California, the young Eckersley emulated Giants' Hall of Fame hurler Juan Marichal and gained a reputation a hard throwing prep star. He was selected by the Cleveland Indians out of high school in 1972 and threw a shutout in his first professional start for the Reno Silver Sox. After only three seasons in the bushes, Eckersley was promoted to the parent club in 1975. The young fireballer paid immediate dividends; not allowing an earned run for the first 28 2/3 innings of his career, a rookie record. His 13-7 record with a 2.60 ERA would have earned him the Rookie of the Year Award had he not been overshadowed by the "Goldust Twins," Fred Lynn and Jim Rice.

Nonetheless, Eckersley future looked bright. He fired a no-hitter in 1977 en route to his first All-Star appearance. He was consistently among the league leaders in strikeouts and ERA and was the unquestioned young ace of the Indians staff. However, behind the scenes, all was not well, Eckersley's wife was involved in an affair with Indians teammate Rick Manning, which ultimately prompted his trade to the Red Sox. Despite this development, Eck responded with a 20-win season in 1978, the year Boston famously lost the AL East title in a one-game playoff. He would go to win 84 games in a little more than six seasons in Beantown, a highlight being named the American League's All Star starting pitcher in 1982.

However, near the end of his Boston tenure, his fastball was not what it once was and Eck was suffering the effects of alcoholism. In 1984, he was traded to the Chicago Cubs for Bill Buckner, one of many deals that would lead the Cubs to the 1984 NL East title. He was inconsistent for much of his tenure in Chicago and they traded him to the Oakland Athletics in 1987. It was at this time that two developments saved Eck's career and propelled him into the Hall of Fame.

The first was his acknowledgement of his alcoholism after seeing a home video of himself with his daughter during Christmas 1986. It served as a catalyst that changed his life. The second was association with manager Tony LaRussa. LaRussa would eventually insert Eckersley as his closer and together the two of them would establish how that role is used today (one inning of work, only come in with a lead). This would culminate in a World Championship in 1989 and four AL West titles in five seasons.

Eckersley's 1992 season was his best. He was only the fourth pitcher to be named both Cy Young and MVP when he had what is generally regarded as one of the best seasons ever for a relief pitcher. His effectiveness slowly began to wane from then on, and after nine years in Oakland he was traded to the St. Louis Cardinals. He ended his career in 1998 with the Boston Red Sox and at the time of his retirement had appeared in more games than any other pitcher in history. He was elected to the Hall of Fame in his first year of eligibility in 2004.

Why I love this card
Eck's glare. Every now and then you would run across a card that would just creep you out as a kid and this card was one of them. Yes, I know that they call this "intensity" these days, but those eyebrows were just at weird angles.

Something else....
Of course, no post about Eckersley would not be complete without mentioning Kirk Gibson's home run in the 1988 World Series. Consider it mentioned. I loved the moment that this home run provided, but if it meant that I wouldn't have to hear the phrase "walk off" ever again (which Eckersley coined) then I would make that trade. Call me old fashioned, but I was never crazy about that term.
Posted by Dean Family at 9:57 PM