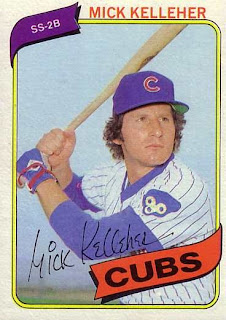 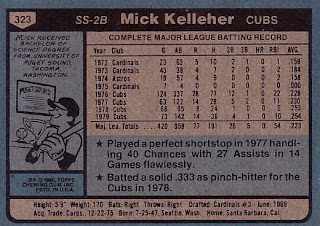 Who is this player?
Mick Kelleher, utility infielder, Chicago Cubs
The current first base coach of the New York Yankees, in 1980 Mick Kelleher had a reputation as a tremendous glove man. He appeared in 105 games, primarily as a defensive specialist. His hitting, however, didn't reach the same laurels. He batted only .146 in limited action at the plate (14 for 96) but his best moment at the plate that year came on September 28 against Pittsburgh. Mick's triple drove in two runs and proved to be the game-winning hit as the Cubs downed the Bucs.

A native of Washington state, Mick Kelleher was a scholar-athlete at the University of Puget Sound in Tacoma. In addition to receiving his bachelor's degree in political science, he was an NCAA Division II All American in 1969 and was named to the NCAA Division II All-Tournament Team the same season. This attracted the attention of major league scouts and he was selected by the St. Louis Cardinals in the third round of the 1969 player draft.

In the minor leagues, Mick paced league shortstops in fielding during four of his minor league seasons and established an American Association record for shortstops with a .979 fielding percentage in 1972. He glove earned him looks by the parent club, but his hitting typically kept him from sticking at the major league level. He was swapped to the Astros and back to the Cardinals, yet still managed to win two Rawlings Silver Glove Awards (in 1972 and 1975) as the minor leagues best fielding shortstop.

His trade to the Cubs before the 1976 season would be a big break for Mick as he was the Cubs everyday shortstop, appearing in a career high 124 games and committing only nine errors. However, with Ivan DeJesus waiting in the wings, Mick and his durable glove was returned to the bench. In his five seasons in Chicago, Kelleher was equally effective defensively at third base, second base and shortstop. A memorable moment came when the diminutive Kelleher got into a fight with Dave Kingman in 1977. An interview with Mick regarding the fight can be found at our friend's site Johngy's Beat.

In Spring Training of 1981, he was traded to the Tigers where he backed up Alan Trammell. Trammell has credited Kelleher with helping him become a Gold Glove winner and Tram would later repay the favor by appointing Mick one of his coaches when Trammell was manager of the Detroit Tigers from 2003-2005. Kelleher would spend one season in Detroit and he was shipped again, this time to the California Angels. It would be his eleventh and final season in the majors after a back injury curtailed his career. Since his playing days have ended, he has served in a coaching or scouting capacity every season since 1984.

Why I love this card
As a Detroit native, I remember Kelleher's stay in Detroit well. Although he was with the Cubs here, this card would be moved to my Tigers team pile in 1981. We all had those right? Didn't matter what year the card was or what team they were pictured with, if they were on the team at that moment, that card immediately was upgraded as being more "special." After all, he was on the home team!

Something else....
Kelleher is credited with tutoring Derek Jeter in his early days and his primary project for the last three seasons has been Robinson Cano. In 2010, the Yankees led the Majors with a .988 fielding percentage and committed only 69 errors, setting franchise records for highest fielding percentage and fewest errors for a season. The Yanks also set a Major League record with 18 consecutive errorless games in 2009, so Kelleher must be doing something right.
Posted by Dean Family at 2:04 PM