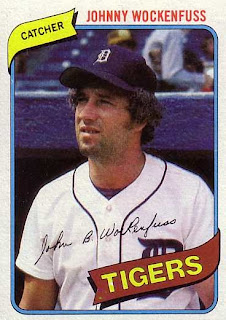 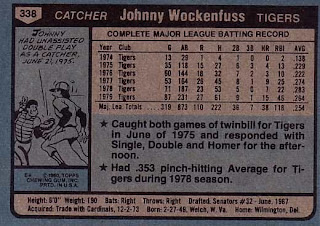 Who is this player?
John Wockenfuss, utility, Detroit Tigers
To merely designate John Wockenfuss a catcher as his 1980 Topps card indicates, would not accurately describe Wockenfuss' contributions to his ballclub. Appearing in a career-high 126 games, "Johnny B." would see action at catcher, first base, designated hitter and two outfield positions. His versatility allowed him to see action nearly every day and 1980 was by far the best statistical season of his career. A popular fan favorite, Wockenfuss was very handy for the Detroit Tigers.

Born in West Virginia, John Wockenfuss was a very late round selection of the Washington Senators in 1967 and signed for $500. He began his professional career as an outfielder and switched to catcher at Double-A Pittsfield in 1972. Johnny promptly led the Eastern League in putouts, assists and chances accepted that season. The following season, the Senators, now the Texas Rangers, included him in a trade that brought Jim Bibby to Texas. Before 1973 was over, he was traded again, this time to the Detroit Tiger organization.

It was with the Tigers that Wockenfuss earned his name in the majors. He broke in during the 1974 season and tied a major league record with an unassisted double play on June 21, 1975. With the Tigers in a position of transition with the retirement of Bill Freehan, Wockenfuss initially saw action behind the plate. In time, however, his versatility at several positions made him a valuable asset.

In 1977, he established his unique batting stance, which can be viewed here. After the 1980 season, he never saw as much action in a single season yet nonetheless was a very popular player. As the captain of the "Riders of the Lonesome Pine," Wockenfuss was the unofficial leader of Tiger reserves such as Champ Summers, Mick Kelleher, Lynn Jones and Stan Papi. As the Tigers of the early 1980s improved Wockenfuss felt that he was instrumental to their success and should be paid accordingly. When he wasn't, his frustration boiled over to the media when he called his teammates "clowns" during Spring Training 1984.

His displeasure known, the Tiger brass made it a point to trade him before the season began. With Glenn Wilson, Wockenfuss was traded to the Philadelphia Phillies for Willie Hernandez and Dave Bergman. Hernandez would become the Cy Young and MVP in 1984 and Bergman a valuable role player. Wockenfuss played two seasons in Philly, retiring after 12 years in 1985. Johnny managed in the minor leagues for several years with the Pirate and Tiger organizations and today operates a baseball instructional school in Maryland.


Why I love this card
I cannot overstate how popular John Wockenfuss was in the Detroit area when I was growing up. Maybe it was the batting stance which invariably, every kid copied during pickup games. Maybe it was because he was known by his middle initial. Maybe it was the blue collar, play-everyday-wherever-I'm-asked attitude that resonated with Detroiters. I always felt a little bad for Wockenfuss that he missed out on the 1984 season and a World Championship. He got a little revenge in 1989 when at age 40 he pitched 5 innings and earned the win in relief in a Toledo Mud Hens exhibition against the Tigers.

Something else....
Check out the youtube link of Wockenfuss' stance. I happend to be the guy that posted it. I don't want to toot my own horn, but...toot, toot.
Posted by Dean Family at 10:53 PM