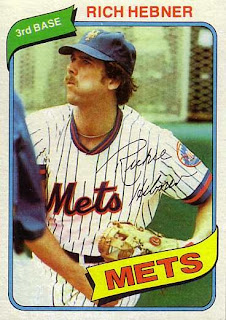 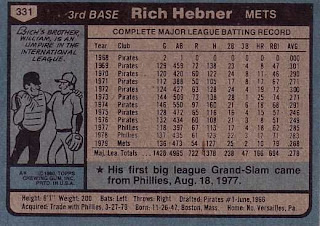 Who is this player?
Richie Hebner, third baseman, New York Mets
For the first time in his career, Richie Hebner would be playing in a new league in 1980. Traded to the Detroit Tigers in November, 1979, he was slated to be the Tigers' cleanup hitter and third baseman. Hebner shifted to first after the trade of Jason Thompson and responded with an All-Star worthy first half, among the league leaders in RBI. An aggravated knee injury cut into his production in the second half, where he spent most of the final month of the season in a pinch-hit capacity. Nonetheless, he finished the year with a solid .290 batting average and respectable 82 RBI (a career high) in 104 games.

The Grave Digger. Today, the native of Walpole, Massachusetts is best known for his off-season training regimen that saw him working as a gravedigger at a cemetery run by his father at a time when major league ballplayers often held other jobs, earning $35 a grave. But it was his athletic ability that drew interest not only from baseball scouts, but hockey ones as well. Hebner was one of the top scholastic hockey players in the country and he was offered a contract by both the Boston Bruins and Detroit Red Wings. When the Pittsburgh Pirates drafted him on the first round in 1966 and signed him for $40,000, Hebner days on the rink were over.

Within two seasons, Hebner was in the major leagues, coinciding with the Pirates dominance of the NL East in the early part of the 1970s. Hebner was a integral performer on the Bucs as their starting third basemen and particularly elevated his game in the post season. He hit a game-winning home run off of Juan Marichal in Game 3 of the 1971 NLCS and helped lead the Pirates to a World Championship. He would leave Pittsburgh after nine seasons as a free agent to sign with the Philadelphia Phillies in 1977. Hebner would switch to first base and be part of two division-winning teams in Philly. In all, Hebner would play for seven division champions during the 1970s.

When Pete Rose arrived on the scene, Hebner was off to New York, traded to the Mets. Hebner was unhappy in New York and was traded again to Detroit, where he spent three seasons as a first baseman/DH. The Tigers sold Richie to the Pirates midway through 1983, where Hebner began the transition into being a part-time player. While he had some notable contributions, he was counted on to provide a big hit off the bench. He signed on as a free agent with the Chicago Cubs prior to the 1984 season, where he made one final postseason appearance. Richie's 18-year career came to an end when he was cut in Spring Training, 1986.

Hebner began a second career in baseball by becoming a manager and coach. He was hired by the Toronto Blue Jays in 1988 to become a manager in the minors. When his good friend Joe Morgan took over as manager of the Boston Red Sox, Hebner was installed as hitting coach for three seasons. He returned to the Blue Jays organization to manage a Triple-A Syracuse and was a coach for the Philadelphia Phillies in 2001. Most recently, he managed the Frederick Keys in the Baltimore Orioles system and was on the Norfolk Tides coaching staff in 2010.

Why I love this card
This card is what this blog is all about for me. Every boy has a favorite player and in 1980, without question, Hebner was mine. Here's why. Hebner was a new Tiger with Pittsburgh roots. My Dad was a transplanted Pittsburgher, I can imagine when he saw this ad in the Spring of 1980, it peaked his interest. 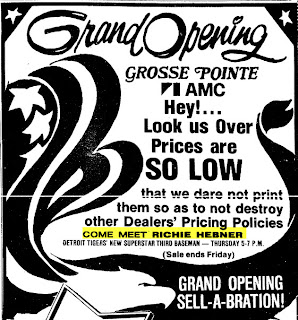 So my Dad took me and to meet my first major leaguer. It was a significant moment in my young life, because things like this didn't happen all the time. Hebner was very nice and asked me about my Pirate hat. I asked him about Roberto Clemente and Willie Stargell. He signed my autograph book and gave me every indication that this is what a professional ball player looked and sounded like. I can't recall how many times I looked at this card during that summer and thought of this day.

Here was a photo from that momentous occasion, yours truly with Mr. Hebner (note the Pirate hat and Tigers jacket) 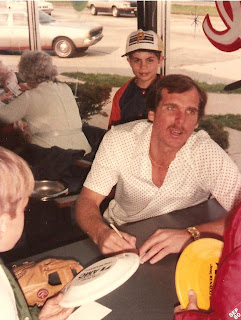 Something else....
No post about Hebner would be worth its salt without a mention of his batting stance. Every time he would step in, he would reach around and tug on the back of his collar. Every time. It would be one of those things we would mimic, like Carew's crouch or Stargell's bat twirl. There is a small video of it here, but not until the 7:55 mark.

Finally, since Hebner was traded early in the off-season, Topps OPC was able to amend his card to mention he was now on the Tigers. What I would have given to have this card in 1980. 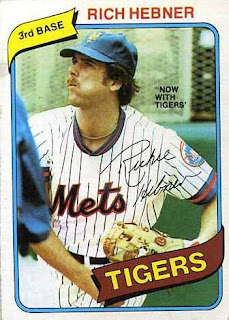