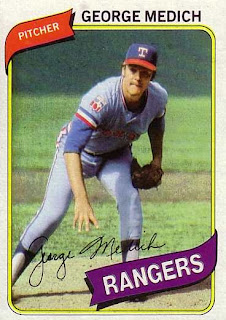 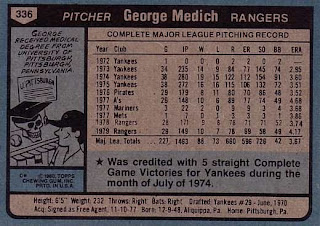 Who is this player?
George "Doc" Medich, starting pitcher, Texas Rangers
Although his card refers to him by the given name, George was widely known as Doc in baseball circles. Doc had a solid reason for the otherwise disappointing Texas Rangers, leading the club in victories with 14. He also logged his most starts and innings pitched in five seasons and was the most consistent starter on the staff. and 1980 was also the year, Dr. George Medich began a five-year residency in orthopedics at Fort Worth Children's Hospital while still pitching for the Rangers.

Born in Aliquippa, Pennsylvania, Medich was a three sport star at Hopewell High School in basketball, football, and baseball. He gained most of his fame as a pitcher enrolled at the University of Pittsburgh. Doc was the Panthers’ punter and starting end on the football team for three seasons. In 1967 he had 23 pass receptions for 269 yards to rank third on the team. He also kept his hand in as a 6'-5" 225 pound power pitcher for the Panthers, consistently ranking as one of the top collegiate hurlers in the East. He was drafted by the Yankees in 1970 and was called up to the major leagues after two seasons in the minors.

Medich quickly became the Yankees best starting pitcher, bursting on the scene in 1973 to win 14 games and post a 2.95 ERA, fifth best in the American League. The following year, he won a career high 19 games and went the route 17 times. Although he won 16 games in 1975, the Yankees used him as trade bait to acquire a second baseman. They found one in Pittsburgh in a 3 for 1 deal that had possibly the only Doc for Dock trade in baseball history.

He had a disappointing season in his hometown and was traded again, this time to Oakland before the 1977 season. Medich was in medical school at the time and was upset with the trade since he was enrolled at the University of Pittsburgh. He bounced around that year to the Seattle Mariners and New York Mets, before signing a free agent contract at the end of the year with the Rangers. Medich would spend five seasons in Arlington, the longest stop of his 11-year career.

Doc won 50 games in a Ranger uniform, leading his league in shutouts in 1981. However, he also tended to make the league leader board in losses, home runs allowed and wild pitches. Texas sold him to Milwaukee in 1982 for the stretch drive and he appeared in the postseason for the first time, pitching for the Brewers in the World Series. He left baseball after that to begin a career in orthopedics, and drew attention in 1983 for false prescriptions and was suspended from his staff privleges in 1992. In 2001,. he plead guilty to 12 counts of possession of a controlled substance and the Commonwealth of Pennsylvania State Board of Medicine suspended Medich's licence. His attorney stated at that time that Medich had been battling addiction for some time.

Why I love this card
Any time you can find a skull on a baseball card, it is a huge plus for a nine-year old. It stood out because I remember opening a pack where the backs of the cards were visible first and I scanned this card before flipping them over to see who I got.

Sommthing else....
Twice during his playing career, Medich went into the stands to aid fans who had suffered heart attacks. He performed CPR on one fan in 1976 (unfortunatley, the fan died later in the day) and in 1978 he revived a man who was suffering a heart attack. I think it's safe to say that we will likely never see a ballplayer today transition into medicine later in life.
Posted by Dean Family at 9:50 PM