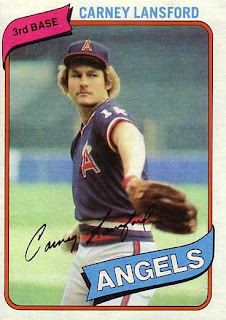 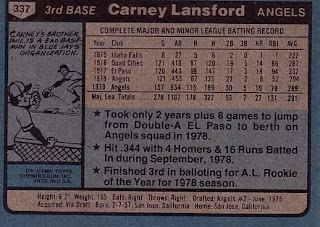 Who is this player?
Carney Lansford, third baseman, California Angels
The June 1980 issue of Baseball Magazine touted Angels' third baseman Carney Lansford as one of the players most likely to be a star in the 1980s. Indeed, when the season began, it was thought that he would be a cornerstone of the franchise. After all only one year earlier, the Angels refused to part with him as part of the Rod Carew trade. However, the Angels changed their stance after a .261 15 80 season and traded him to the Boston Red Sox in exchange for All Star veteran Rick Burleson.

A native Californian born to an athletic family, Carney Lansford's little league team from Briarwood played in the finals of the 1969 Little League World Series. He was a three-sport star in high school, primarily in baseball. This drew attention from several teams and the California Angels drafted him on the third round in 1975. He spent a little over two years in the bushes, where a .332 average at El Paso in 1977 earned him a call to the majors for good. He made the Angels squad the following season as starting third baseman. His .294 average, speed and exceptional fielding drew raves, as well as a third place finish in Rookie of the Year voting.

He was a major piece of the 1979 AL West Champions, clubbing 19 home runs while typically batting second in the lineup. After his trade to Boston, he had a breakout season, leading the league with a .336 average and earning his only career Silver Slugger Award. Remarkably, Lansford was the only righthanded batter to lead the AL in an 18-year span (1971-1988). However, the emergence of Wade Boggs numbered his days in Beantown and he was traded again, this time to the Oakland A's for All-Star slugger Tony Armas.

It was in Oakland that Lansford earned his most renown. Although today he primarily remembered for his role on the dominant A's teams of the late 1980s, Lansford starred for them during many of the previous lean seasons. He was a .288 career hitter for Oakland, three times topping .300. He led baseball with a 24-game hit streak in 1984 and was named to the AL All Star team in 1988. Injuries and personal tragedy periodically interrupted his bottom line figures, but Lansford rightfully earned a reputation as a professional hitter with an excellent glove and a reliable teammate. The culminated in 1989 with a Worlds Championship as Oakland defeated the San Francisco Giants.

After the 1992 season, Lansford retired, completing 15-years of major league service. He transitioned into coaching, first as a bench coach with Oakland (1994-1995) and then with St. Louis (1997-98) and served as manager of the 1999 Edmonton Trappers. He left coaching to focus on the careers of his son's (both of whom are in the minor leagues) before returning in 2008 as hitting coach of the Giants. After a somewhat controversial tenure there, he now serves in the same capacity for the Colorado Rockies.

Why I love this card
I was always a fan of warm-up jerseys, primarily because you never really got to see them. The only time you could is if you showed up early for batting practice (which they never allow these days) or on cards. The Angels one always intrigued me. I don't know if they were the first to have them, but I am stretching to think of another.

Something else....
Lots of interesting tidbits about Carney. First he is a direct descendant of Sir Francis Drake and is also a distant cousin of Tex Ritter. Second, he is one of only seven men to play in both the Little League and Major League World Series. Finally, he had a cameo appearance in the 1994 movie "Angels in the Outfield" as White Sox slugger Kit "Hit or Die" Kesey 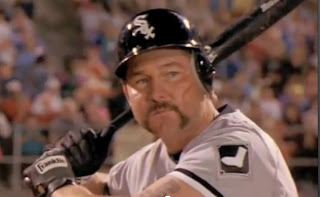 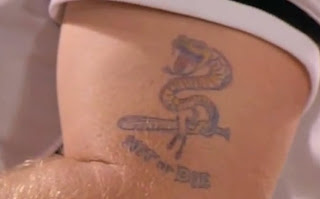