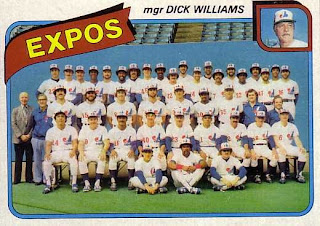 I am sad to report that former major leaguer and Hall of Fame manager Dick Williams has died. He was 82 years old.

It is being reported that Williams died today at his Las Vegas home from what was believed to be an aneurysm.

Featured here is Williams on the 1980 Montreal Expos team card.

Our sympathies go out to the Williams family.
Posted by Dean Family at 8:55 PM