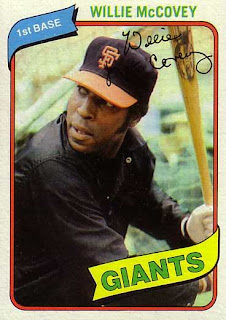 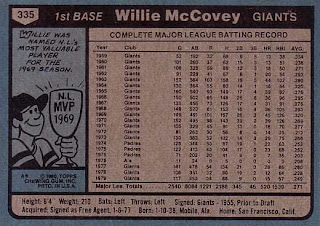 Who is this player?
Willie McCovey, reserve, San Francisco Giants
As the only active member of the illustrious 500 Home Run Club in 1980, pulling a Willie McCovey card that summer was a fairly big deal. After all, he was a future Hall of Famer and bonifide legend. Despite his senior status, there were calls in the media for "Stretch" to step aside. When Mike Ivie was slow recovering from injury, McCovey saw some starting action and in the process, became the eighth man in history to plan in four decades. Willie struggled and was replaced at first by Rich Murray. Shortly thereafter, he announced his retirement. Later that season, a day was held in his honor and his #44 was officially retired by the Giants.

Originally signed by the New York Giants, McCovey made a historic debut in 1959 against fellow future Hall of Famer Robin Roberts. Going 4-4 with two triples, he instantly became a fan favorite in San Francisco en route to winning the 1959 Rookie of the Year Award. He was inconsistent over the next three seasons, primarily due to a deep talent pool the Giants had at the time. He was a role player on the 1962 NL Champions, playing primarily outfield and occassionally first base. McCovey showed signs of things to come when he banged 20 home runs and slugged .590 in just 229 plate appearances.

In 1963, Willie led his league in home runs and topped the 100 RBI mark for the first time. He slowly evolved into one of the most feared hitters of his era and he moved to first base full time when Orlando Cepeda was injured and subsequently traded. During a six-year period (1966-1970), Willie hit 226 home runs and averaged 100 RBI per season. Making this accomplishment even more remarkable was that it was done during the so-called "second dead-ball era" where pitchers dominated the landscape. He was the National League MVP in 1969 when he batted .320 and led baseball with 45 home runs and 126 RBI. Willie was also the MVP of the 1969 All-Star Game when he crushed two home runs en route to a NL victory.

Willie helped lead the Giants to the 1971 NL West title, but the long effects of arthritis in his knees began and other injuries began to take their toll. In his prime, Willie admirably played in pain much of the time, but as he aged, that became more difficult to do. The Giants mistakenly thought that McCovey was near the end of the road, and traded him to the San Diego Padres. Willie would go on to play eight more seasons and hit 108 more home runs. McCovey led the Padres in home runs both full seasons he played there, but they sold him to the Oakland A's lat in the 1976 season. Willie only appeared in 11 games with Oakland.

He made a trimphant return to the Giants in 1977 where he became a mentor to younger players, helping the 1978 team to a memorable summer in contention. That season he hit his 500th home run and finished his career with an NL record 18 grand slams. In retirement, he became a Giants consultant and was elected to the Hall of Fame on the first ballot in 1986. The Giants have annually awarded the Wille Mac Award to honor his spirit and leadership and a statue has been dedicated to him at AT&T park. The inlet of San Francisco Bay beyond the right field, historically known as China Basin, has been famously redubbed McCovey Cove in his honor. Although confined to a wheelchair today due to numerous surgeries, McCovey is still a fixure at the ballpark.

Why I love this card
First off, it's McCovey, what kid wouldn't be excited to get this card. It is also McCovey's second in this set, the other being a highlight card. But I will admit, Willie's signature on this card always bugged me somewhat. The little loop that hooks down onto the bill of his cap seemed out of place. Kind of reminded me when a hair would get loose on a movie screen and flickered in the corner...just enough to be annoying.

Something else....
McCovey is known in popular culture for a famous Peanuts cartoon and his bat was a focal point of Mick Foley's book "Scooter." However, I will always remember McCovey with a connection to my son. In the summer of 2007, he was six years old and we were playing wiffle ball in the back yard. He hit it over the neighbors fence for the first time and it landed in their in-ground pool. He extended both arms over his head and exclaimed "Into McCovey Cove!!!" I don't think I will ever forget that.

Finally, Willie's wikipedia page has a picture from Willie's last game that I thought I would include: 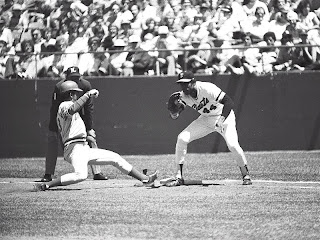