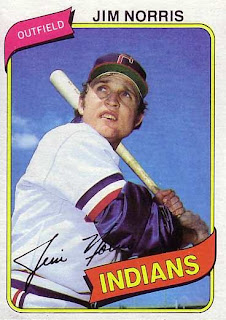 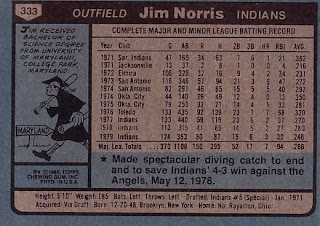 Who is this player?
Jim Norris, reserve outfielder, Cleveland Indians
Even before the 1980 season would get underway, Jim Norris had already switched uniforms, traded from the Cleveland Indians in January to the Texas Rangers. A useful utility man, Norris could play all outfield positions and occasionally first base. While he did not start regularly, he contributed a game-winning hit against the Yankees in May and drove in the winning run of a 13-inning marathon against the White Sox in July. Jim would appear in 119 games in 1980 and bat .247.

Born in Brooklyn, New York, Jim Norris was a star at the University of Maryland before his career was slowed by injuries. He was drafted by the Indians in the fifth round of the 1971 player draft and was given a mere $2500 bonus. It took Norris quite some time to make it to the major leagues. A six year odyssey in the minors saw Norris suffer numerous injuries including a broken collarbone, shoulder, left arm, right arm, right hand, and right thumb, not to mention torn cartilage and ligaments in his right knee. Nonetheless, he demonstrated patience and perseverance, even being named a player-coach during his time at Triple-A Toledo.

Norris became the "feel-good" story of Spring Training 1977 when he survived the final cut and made the Indians roster. The fairy tale continued into Opening Day, where his two singles and dazzling outfield catch help lead the Indians to a 5-4 win over the Boston Red Sox.

As the Indians' starting centerfielder that season, he batted .270 and led the team with 26 stolen bases. Because of his Opening Day heroics, he quickly became a fan favorite and was even voted the Indians "Unsung Hero" by the Cleveland press. The following season, he saw action mainly a fourth outfielder, a role he would have for the remainder of his stay in Cleveland. He gathered a reputation as a fine fielder with excellent speed despite his many injuries.

His 1980 season in Texas would be the final one of his brief four year major league career. He was unable to make the club in 1981 and spent the season with the Wichita Aeros. At age 32, he called it a career. In 1989, Norris and his wife established Norris Sales & Marketing Inc in Burleson, Texas. According to records, it is a private company categorized under Building Stone Products. Current estimates show this company has an annual revenue of $2.5 to 5 million.

Why I love this card
Actually, I think my Mom would have loved this card more than I did. The jacket that Norris is wearing under his uniform reminds me of all the Little League games I played in April in Michigan when the weather was terrible. My mother insisted that I wear the jacket under my uniform, which made me feel soooo awkward. When I saw this card, I couldn't help but wonder if Norris' mom made him wear a jacket as I had to. Again, a small innocuous connection that drew baseball a little closer to the nine year old. And I got the last laugh as I didn't have to wear a jacket over my Stormtrooper costume that Halloween.

Something else....
Norris' card stood out for me because it was one of those Double Printed cards. If you need a small refresher, there were a couple old posts here and here.
Posted by Dean Family at 10:20 PM