Dwight Gooden, 7-11 and the Fourth 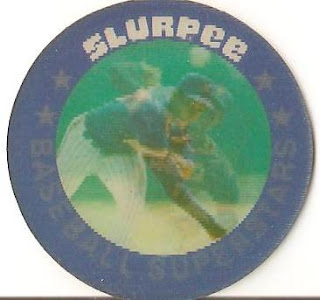 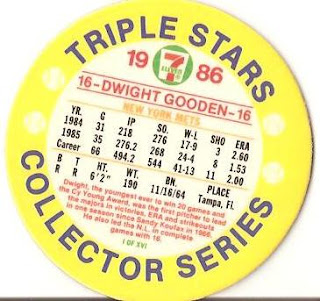 Disclaimer: This post has nothing to do with the 1980 Topps set, rather a remeberence of my father, who was the original inspiration for this blog. Periodically, I will break away from the 1980 set, to include these entries as a tribute to the man who started my card collection and my interest in the game.

The Fourth of July was one of my Dad's days. I guess that we all like certain holidays over others, but this one was one of his favorites. Like most, he liked to grill and he liked having family over. He always made a mention somehow of our service men/women and the sacrifices that they make. Year after year, pretty much the same thing. You knew what you would be doing on the Fourth. It was set.

Today was the first one without him. We did the same things, we had family over. Except this time, my brother-in-law did the grilling. I could see how tired the whole affair made my Mom, but she did it primarily to keep the tradition going, keep memories alive.

I found this today when I was going through an old shoe box of stuff. Slurpees also remind me of summer. I can remember sitting on the curb being impressed with the stats on the back. A 2.00 career ERA? It's hard to explain how huge Dwight Gooden was in those days. He was the man. A Strikeout Machine. A lock for the Hall of Fame.

Now I was no Mets' fan, but as baseball coverage and cards began to really escalate in the mid-1980s, Dwight Gooden was The Next Big Thing. It was a great summer to be a fan with several new products out (granted some were junk) and games all over cable TV. For a baseball-hungry boy, there was plenty to choose from.

Of course, my Dad was not as impressed with only two seasons. "Let's see what happens," is what he probably said, a reminder that its the body of work that counts, not just the highlights. He told me about Herb Score and how his flame was snuffed and reminded me about Steve Carlton and Nolan Ryan and how teams gave up on them and how, over time, they established themselves as the greatest pitchers in the game.

I begrudingly agreed. When Gooden's star fell, my Dad didn't gloat or "told me so." He did point out when guys like Ryan or Carlton did well or were elected to the Hall of Fame.

Which brings me back to today.

I can see why my Dad didn't gravitate towards Gooden as I had. Why it didn't excite him as much as it did me. For him, it was about consistency, working hard. Reliability. Knowing what to expect and counting on it. Year after year, pretty much the same thing.

And all this time, I thought that he was talking about pitching.
Posted by Dean Family at 9:45 PM