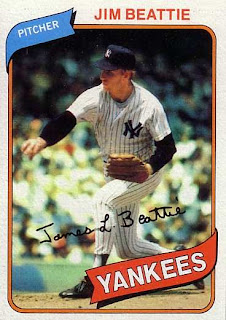 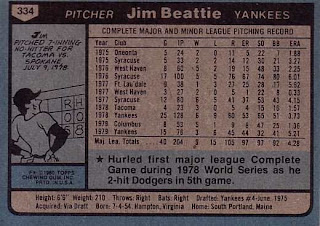 Who is this player?
Jim Beattie, starting pitcher, New York Yankees
After spending two frustrating seasons in New York, by the time 1980 began, Jim Beattie was wearing the uniform of the Seattle Mariners. The 25-year old right hander was the key man in a six player deal that sent Ruppert Jones to New York. Given an opportunity to start regularly, Beattie was immediately installed as the Mariners #2 starting pitcher. However, Jim struggled in his first season as a Mariner, with an ERA well over 5.00 for most of the season. He finished the campaign with a 5-15 record and a 4.85 ERA as the Mariners finished last in the AL West. However, it was still generally felt that there was a strong upside to Beattie and that his 1980 performance was not indicative of his true talent.

Born on the Fourth of July, Jim Beattie starred both on the baseball diamond and basketball court at Dartmouth University before he was selected by the New York Yankees in 1974. With a deep wealth of pitchers on the Yankees, it took some time before Beattie could break into the major leagues. He did so in style in 1978 defeating future Hall of Famer Jim Palmer in his debut. He begane the year slowly, but was instrumental in the great Yankee comeback that season, winning won four of his six decisions in September and finishing his rookie season with a 6-9 record. He followed that performance with a win in the ALCS against the Royals and a complete-game victory against the Dodgers in Game 5 of the World Series.

However, the chaos of the "Bronx Zoo" management did more to impair Beattie's improvement and he was shuttled between the majors and minors in 1979. He was on the mound when Carl Yastzemski collected his 3000th hit, but the year was otherwise forgettable. The trade to Seattle was welcomed by Beattie, and although he did not pitch well in 1980, his health improved the following year. As Beattie told Baltimore Sports and Life:

My improvement came as a result of two things, getting healthier and pitching more. In 1980 my shoulder did not allow me to throw easily and hard although I kept going out to pitch and tried to battle through it. When I got healthy during the 1981 season (pitching in the minor leagues during the strike) I came back a different pitcher

In 1982, Beattie set a club record for a starter by pitching 19 consecutive scoreless innings and finished in the top ten in strikeouts. On September 27, 1983, Beattie threw the first one-hitter in Mariners history and the following year was fourth in the American League in complete games. However, it was difficuly for Jim to post a winning record because he pitched for poor Mariner teams. The final two seasons of his nine-year career were marred by injuries and when he retired after he was released by the Mariners at the end of the 1986 season.

Beattie returned to school where he earned his Master's Degree and began a long career in baseball administration. He returned to the Mariners in 1989 as Director of Minor League Operations and help oversee the M's rise in the 1990s. He moved on to the Montreal Expos as their General Manager and later assume the same role with the Baltimore Orioles. Today, he is a employed as a scout with the Toronto Blue Jays.

Why I love this card
Beattie signs his full name on the facimile autograph on this card. This was the way that we had to sign things in school. Complete first name "no nicknames," as Sister Julie would say, with middle inital. I wonder if Jim Beattie hated signing his full name as much as I used to back in 1980.

Something else....
Beattie was Director of Minor League Operations when they drafted Alex Rodriguez. He was also the GM when the Montreal Expos traded Pedro Martinez to the Boston Red Sox (granted, he had little choice in the matter). He also drafted future All-Stars Grady Sizemore, Milton Bradley, Jason Bay, Brandon Phillips and Cliff Lee.
Posted by Dean Family at 6:16 AM