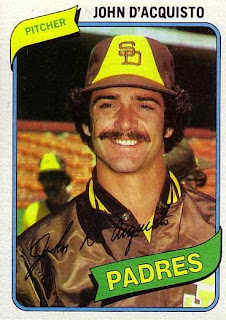 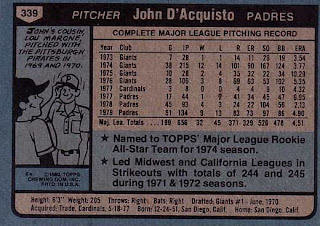 Who is this player?
John D'Acquisto, relief pitcher, San Diego Padres
As the 1980 season wore on, John D'Acquisto was pitching in middle relief for a San Diego Padre team that floundering in last place. The 28-year old's solid, if unspectacular, output caught the eye of the Montreal Expos who traded for D'Acquisto in August to strengthen their bullpen for the stretch drive. John fashioned a 2.14 ERA in 21 innings with Montreal, but it belied the fact that he walked nine and had five wild pitches. Nonetheless, the California Angels came calling after the season and signed John to a multi-million dollar contract.

Born in San Diego on Christmas Eve in 1951, D'Acquisto grew up a Giants fan in the days before San Diego had major league baseball. Like most major leaguers, D'Acquisto excelled in high school at several sports, earning 144 college offers for football. Baseball, however, was his first love and he was selected in 1970 by the San Francisco Giants. The following spring he attended Spring Training, largely based on his ability to throw consistently at 100 MPH, a rare feat at that time. However, he was sent to the minors for some seasoning before returning to the bigs for good two years later.

He had his best season in 1974. Inserted into the Giants rotation, he won 12 games, finished in the top 10 in strikeouts and won the Sporting News Rookie Pitcher of the Year award. While he showed some wildness (was second in walks allowed), there was a general consensus that D'Acquisto had the "stuff" to be a great power pitcher. Unfortunately, he injured his arm, damaging nerves and missed nearly all of the 1975 season. Doctors even suggested that he may not even play again.

D'Acquisto struggled in his return to the majors and unfortunately, teams were not as patient then as they are today. Traded from the Giants to the Cardinals and finally to the Padres in less than three seasons, John transitioned into a relief specialist. In 1978, he had an excellent year as Rollie Fingers' setup man, a season that saw the Padres record their first ever winning season. He switched to the American League for the 1981 season in the hopes of helping the Angels return to the postseason, but injuries limited his effectiveness and 1982 was the final season of his 10-year major league career.

In retirement, John D'Acquisto has found a variety of experiences. After working in banking during his playing days, he transitioned into a second career as an investment banker. In 1996, he was sentenced to 63 months in prison for investment fraud, a crime proven later that he did not commit. He also worked as a fireman in San Bernadino for five years and was the pitching coach for the US Navy Baseball Team. After many years, D'Acquisto earned his Doctorate in Exercise Science and Physiology in 2004 and several of his studies have been published. Today, he is the Director of the Agriculture Division for Sorganics, Inc.

Why I love this card
I have admitted my ignorance for much of the NL West during this span of my youth, simply since we never saw the Padres in the midwest. What stuck me about this card was the following; I never thought that I was pronouncing D'Acquisto's name correctly; the yellow and brown were (and still are) mesmorizing; and like the cousin on the back of this card, I too have one that wears exactly the same shirt. Then and now.

Something else...
D'Acquisto tied an NL record with three wild pitches in one inning on September 24, 1976. I know it's not much...I must still be mesmorized by the brown and yellow.
Posted by Dean Family at 10:00 PM