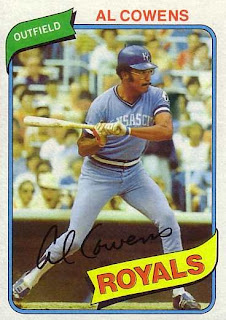 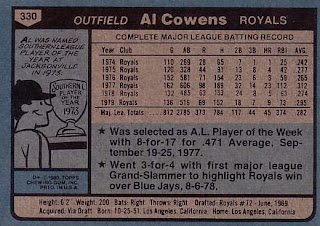 Who is this player?
Al Cowens, rightfielder, Kansas City Royals
Two new teams, a brawl and an arrest warrant shaped the 1980 season for Al Cowens. Traded to the California Angels before the start of the season, he was shipped to the Detroit Tigers in May because Jason Thompson (a Gene Autry favorite) was available. He was in Detroit for less than a month when he charged and struck Chicago White Sox pitcher Ed Farmer in retaliation for a beaning the previous season. In an unusual move, a warrant was put out for Cowens' arrest, but the controversy ended in September when Farmer and Cowens buried the hatchet. He rebounded from his slow start with the Angels to hit .280 with Detroit and finish the year at .268.

Alfred Edward Cowens Jr. was born in Los Angeles, California and initially earned local renown as a football player at Centennial High School in Compton, CA. He was teammates with fellow future major leaguer Mitchell Page. The Kansas City Royals drafted Cowens on the 84th, yes 84th, round of the 1969 June free agent draft. He worked his way up the minor league ladder, first garnering attention in 1971. Cowens led the California League in fielding percentage that season and later was named Southern League Player of the Year in 1973. That performance earned him a promotion to Kansas City and he would spend the next 13 seasons in the major leagues.

An exceptional athlete, Al's tools were very subtle and often unnoticed by the media. His teammates, however, appreciated Al's skills in the field and at the plate. He was an integral part of a Royals team that won three consecutive AL West flags in the late 1970s, consistently providing stellar defense, speed on the basepaths and a timely bat when needed.

Cowens' best season came in 1977 when he was MVP-runner up to Hall of Famer Rod Carew. Playing in all 162 games, Al hit .312 that season with 189 hits, 23 home runs and 112 RBI. He was also recognized for his defensive excellence with his first (and only) Gold Glove Award. Cowens was a durable .282 hitter in his six Kansas City seasons rarely taking time off unless he was truly hurt. One such occasion came in 1979 when a pitch from Farmer (then with the Rangers) broke his jaw. Cowens felt he was hit intentionally and certainly Farmer did little to change that perception. Those bad feeelings would culminate in their 1980 brawl.

Al was sold by Detroit to Seattle prior to the 1982 season and he experienced ups and downs in Seattle. Most often, he was a productive outfielder contributing decent power and average as well as good defense. The only exception would be his slump during the 1983 season that saw him hit only .205. The Mariners were not a good ballclub during this era, but Al was a bright light in an otherwise dismal situation. As young players in Seattle began moving up, the veteran Cowens soon saw a decrease in playing time and his release in 1986. In retirement he scouted for his first team, the Royals and coached high school kids in California. Sadly, Al Cowens passed away from a heart attack in 2002 at the young age of 50. Today, his son runs the Al Cowens Heart Healthy Foundation.

Why I love this card
Being from Detroit, I remember the fight. What I remember more though was that no one seemed to understand what and why it was happening since it happened when both Farmer and Cowens were with different teams. I had the pleasure of meeting Cowens and getting his autograph the following season at Tiger Stadium and distinctly recall how polite and patient he was with all of the kids gathered. That will be the Al Cowens that I remember.

Something else....
Below is a version of Al's 1980 OPC card that designates him a member of the California Angels. With a traded set a year away, there would not be any mention of Cowens as a Tiger until 1981. 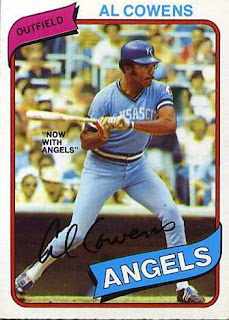 I neglected to include Tom Underwood's 1980 OPC card in his post the other day, which I will show now and add to his post. 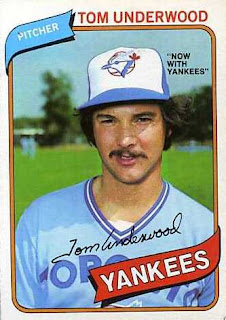