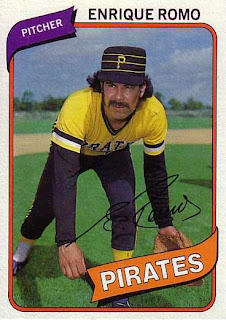 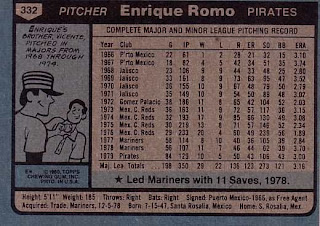 Who is this player?
Enrique Romo, relief pitcher, Pittsburgh Pirates
As one of the trifecta of relievers that helped the Pirates to the 1979 World Championship, Enrique Romo's role in 1980 was clearly defined. As the righthanded setup man to closer Kent Tekulve, Romo appeared in 74 games, good for fifth in the league. Known for his wixed screwball and a fiery temper, Romo won five games and recorded eleven saves in helping the Pirates stay in contention well into September. A highlight came on October 1, when he hit a grand slam home run to help defeat the New York Mets.

Born in Mexico, there had be periodic questions of Romo's true birth date over the years. The brother of major league pitcher Vincente Romo, he followed his older brother's path, first to the Mexican League where he became a star hurler. Romo pitched for 11 seasons in south of the border helping lead the Mexico City Red Devils to three championships. Romo evolved into the ace of the Devils staff with a truly outstanding season in 1976. Recording a 20-4 record with a 1.89 ERA, Enrique earned the attention of major league scouts.

Signed by the Seattle Mariners in their inaugural season, Romo was a bright spot on an otherwise struggling pitching staff. He led the team in saves his first two seasons in the Emerald City and was a factor in 36% of the Mariners victories in those early days. The Mariners traded him to Pittsburgh in the winter of 1978 for a package of players and it was with the Pirates that Enrique would make his lasting contribution.

Appearing in a whopping 84 games in 1979, Romo was second only to teammate Tekulve in that category. After a slow start to the season, Romo was a rock during the summer, winning seven games in a row and pitching 19 2/3 scoreless innings at one stretch. He suffered a minor hamstring injury, which hampered is effectiveness in the postseason, but he still appeared in four postseason contests. Nevertheless, his contributions were vital to the "Family" and team captain Willie Stargell dubbed him "Pancho Villa."

Romo's effectiveness began to decline after the 1980 season, as his ERA swelled over 4.00 in 1981 and 1982, and his strikeout rate similarly fell. Despite that, he managed an excellent 9-3 record in 1982 and was expected to return to the Pirates the following season. Despite numerous requests, he never reported when Spring Training began in 1983. Several theories for this exist, including an apparent threat on his life if he returned to Pittsburgh. Romo's six year career was over and he apparently vanished to his native Mexico. However, he returned to the spotlight briefly when he was inducted in the inaugural class of the Mexican Baseball Hall of Fame in 2003.

Why I love this card
I am glad to see that Topps maintained the consistency in the cartoon on the reverse to show Romo in his Pirate pillbox hat with brother Vincente.

Something else....
Interesting stat: both Enrique and Vicente finished their major league career with identical totals in losses (33) and saves (52). Vincente also had a huge gap between appearances, pitching for the San Diego Padres in 1974 and with the Los Angeles Dodgers in 1982.
Posted by Dean Family at 10:33 PM