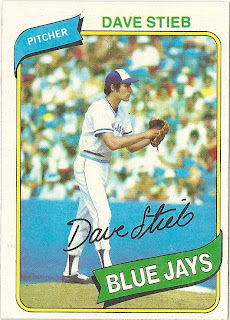 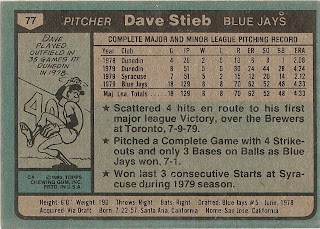 Who was this player?
Dave Stieb, starting pitcher, Toronto Blue Jays
Entering only his third professional season in 1980, Stieb was already establishing himself as ace of the Blue Jays staff. After being called up to the majors in 1979, Stieb won eight games in half a season and was the brightest pitching prospect in the Toronto organization. He continued his solid pitching in the first half of the 1980 season and was the Blue Jays' All Star representative. Although he slumped in the second half and finished 1980 with a losing record (12-15) it was becoming clear that Stieb would become one of the best pitchers in baseball.

From 1980-1985, Stieb was selected to the All Star Game five times, and seven times overall. In 1982, he won 17 games and led his league in innings pitched, complete games and shutouts. He was also named Sporting News Pitcher of the Year. Meanwhile, the Blue Jays were adding young talent around Stieb and the team slowly built itself into contention. By the All Star break of 1983, the Blue Jays were in first place and Stieb was a Sports Illustrated cover boy. He was also the team's first ever starter in the Midsummer Classic and won the game for the AL for the first time in twelve years.

In the mid-1980s, Stieb was a dominant force on the mound. He again started the All-Star Game in 1984, the last AL pitcher to do so back-to-back. His earned run average dropped every season from 1982-1985 when he led the AL with a 2.48 mark and Toronto won their first division title. Stieb had a high-strung personality and was known as a fierce competitor on the mound; he was regularly seen having animated conversations with himself during pitches when in difficult situations. With Stieb, it was his best way to motivate himself to get out of a jam.

He is the only Blue Jay to ever throw a no-hitter, when he did so in 1990. This accomplishment came only after several other near-misses, most notably a near-perfect game. He finished the 1980s as the decade's second-winningest pitcher, but the Blue Jays failed to win a postseason series. That would change in the 1990s. Stieb began the 1990 in similar fashion (18-6 2.93) but he began to experience arm trouble the following season, injuries that would derail his career. While he was on the roster of 1992 World Champions, he was unceremoniously released shortly thereafter.

He caught on with the Chicago White Sox in 1993 but pitched poorly in four starts and retired. Five seasons later, he attempted a comeback and made the Jays pitching staff as a swingman. He pitched decently in his swan-song season, appearing in 19 games, starting three and earning two saves. Satisfied with a nice end to his career, Stieb retired again, this time for good, completing his 16-year career. Today he is still involved with the Blue Jays as a Spring Training instructor.

Why I love this card
OK, I'll be honest. I wasn't crazy about Dave Stieb. Maybe it was because he was a Tiger nemesis in the mid-1980s. Maybe it was the temper tantrums (yet I loved Jack Morris, go figure). Maybe it was the fact that he wrote his autobiography in the middle of his career. I just didn't like him. However, this card may be the only Topps card of Stieb's career in which he wasn't sporting facial hair and for a while, this card was the second-most wanted Rookie card of the 1980 set.

Something else....
Stieb's appearance marks the third card in a row to feature eventual 1980 All Stars. Of course, it got me to thinking and so far that makes 11 players already (out of 61) or 18%. For those of you keeping score at home: Vida Blue, Al Bumbry, Gary Carter, Bucky Dent, Carlton Fisk, Ben Oglivie, J.R. Richard, Bill Russell, John Stearns, Stieb, and Bruce Sutter.
Posted by Dean Family at 8:44 AM