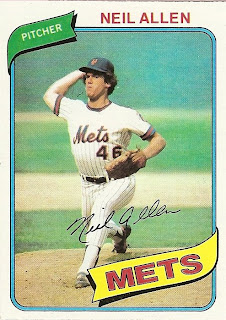 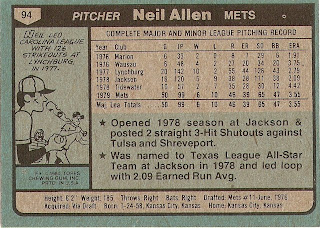 Who is this player?
Neil Allen, relief pitcher, New York Mets
As a rookie in 1979, Neil Allen was the youngest player in the National League. He began the year in the starting rotation and faltered, going 0-5 with a 7.48 ERA in his first six appearances. After a stint on the disabled list, he flourished when moved to the bullpen, winning six games and saving eight. He took over the closers' role in 1980 and saved 22 games for a Mets team that lost 95. The right-hander finished fourth in the NL in saves and games finished.

Signed as an eager 18-year old out of Kansas, Allen reluctantly chose pro baseball over college football. Allen was a hard thrower that would make his way through the Mets' minor league chain in less than three seasons. By 1981, he was one of the top closers in his league, finishing third in saves and posting a 2.97 ERA. Only the Mets poor team performance during this era prevented Allen from posting an even higher save total. During 1980-81, Allen had a hand in 54 of the Mets 108 victories. However, the pressure of playing in New York and shaky self-confidence, eventually began to erode Allen's effectiveness.

In the early part of the 1983 season, the stress became too much for Allen. A series of poor performances (at one point he lied about his wife being in the hospital to avoid going to the park) and a bar brawl led him to admit an alcohol problem. It was determined that the alcohol was not a long-term problem, but something brought on by stress. To accommodate, the Mets made him a starting pitcher, but there was little success. Eventually, they traded Allen to the St. Louis Cardinals for Keith Hernandez. He finished the 1983 season in the Cardinal rotation and won 10 games. His career was back on track.

In 1984, he served as a productive setup man to Bruce Sutter, winning nine games and posting a 3.55 ERA in 57 appearances. When Sutter left the Cardinals the following season via free agency, the closer role was handed back to Allen. On his first appearance, he allowed a game-winning home run to Gary Carter. It would be a foreshadowing of things to come as Cardinals' closer, primarily the comparisions to Sutter and harsh treatment by St. Louis fans. With a 1-5 record and an ERA hovering around 6.00, the Cardinals traded him back to New York, this time with the Yankees. He was effective with the Yankees, posting the best ERA of his career in the 17 games he appeared.

Allen was traded again in 1986, this time in a package to the Chicago White Sox. He did well as their #5 starter going 7-2 with a 3.82 ERA. The 1987 season was horrendous as Allen was 0-7 with a 7.07 ERA and was released by Chicago in August. Given another look by the Yankees, the yo-yo continued as Allen pitched well in a setup role in 1988 for the Yankees. His career ended the following year in Cleveland wrapping up 11 roller-coaster years. In retirement, Allen served as pitching coach for the Yankees at Columbus. He is widely credited with introducing the sinker to Chien-Ming Wang that has become his signature pitch. He is currently the pitching coach with the Montgomery Biscuits of the Tampa Bay Rays organization.

Why I love this card
The cartoon on the reverse side. I love the batter with the Swiss cheese bat representing Allen's strikeout totals. This is also a Rookie Card and was from a time when Allen's career was just beginning. You can almost feel the optimism.

Something else....
Depending on where you look, Allen appears to be the answer to a trivia question: "Who is the only man to have struck himself out?" Allen himself discussed that here. Problem is, though, it didn't happen. At least not officially. The only year that this could have happened was 1983 when he was traded from the Mets to the Cardinals. The Mets dealt Allen to St. Louis on June 15. The Cardinals that year were scheduled to play the Mets at Shea Stadium in single games on April 8 and 9, and in a double header on April 10.The game on April 8 was rained out. The Cardinals beat the Mets, 5-0, on April 9. Then, the double header games the next day were canceled because of rain. The next time the two clubs met was in a double header on June 20 at Shea. Allen as a member of the Cardinals did not pitch in either of these games. He started games against the Mets on June 21 and September 14, neither of which were continuation games.
Posted by Dean Family at 11:56 AM