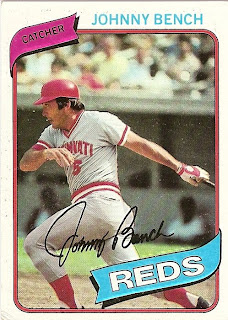 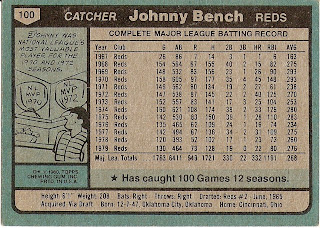 Who was this player?
Johnny Bench, catcher, Cincinnati Reds
Hall of Fame, Class of 1989
At the moment this card came out, Johnny Bench was not only one of the most famous faces in baseball, but in all of sports. He was also entering a phase of his career in which milestones and career accolades started to become more frequent. He set record for most home runs by a catcher in 1980 and another record when he caught in 100 games for the 13th consecutive season. He started his 10th All Star Game for the National League and finished 10th in the league in home runs. When the season ended, the man most synonymous with catching announced that he wanted to play another position in an effort to extend his career. He was the Cincinnati Reds.

To baseball fans, Johnny Bench's story is fairly well known. Born in Oklahoma, he was heavily influenced as a young boy by Mickey Mantle to play baseball. His father encouraged him to catch as that would be his fastest route to the major leagues. An exceptional athlete, he was also the valedictorian of his graduating class in high school. Drafted by the Reds, his time in the minors was short as he was projected as a future star, primarily after he was named Minor League Player of the Year in 1967.

The prophecy proved correct. Rookie of the Year in 1968. National League Most Valuable Player in 1970 and 1972. 10 Gold Glove Awards. The cover of Time magazine. The Reds, meanwhile, were becoming one of the best teams of all-time. The "Big Red Machine" made six postseason appearances during the 1970s, playing in four World Series. The Reds won back-to-back titles in 1975 & 1976, with Bench being named the MVP. During this period, Bench faced the most serious threat to his career when a benign lesion was removed from his lung. He made a complete recovery. He would finish the decade of the 1970s with the most RBI of any player in the game.

In later years, worn out by catching, the Reds finally moved him to first base in 1981. On May 28, Bench fractured his ankle, with his batting average at .343. He missed two months and finished the season at .309, as the Reds finished with the best record in the strike-shortened season. Bench played primarily third base the next two seasons, but went back behind the plate for his last game at the end of 1983, dramatically hitting a home run in front of his Cincinnati fans. He was elected to the Hall of Fame in his first year of eligibility.

His lasting legacy is likely the way he revolutionized the position of catcher unlike any player before or since. Prior to Bench, most catchers typically lacked the fielding skills or quickness to play elsewhere. His athleticism inspired young athletes to become catchers and teams began seeking and developing more athletic ballplayers for the position.

Why I love this card
When I got this card, I thought it was an error when it did not have the "All-Star" designation. After all, it's Johnny Bench. It was inconceivable to think that anyone else could possibly take his place as THE All-Star. Its hard to imagine now, but Bench's accomplishments were groundbreaking, both offensively and defensively. There was no other catcher in history like him. How could a kid not love a card of a superstar of Bench's caliber?

Something else....
In retirement, Bench made a career out of being Johnny Bench. Most kids of my generation remember the "Baseball Bunch", Krylon Spray Paint, or Sugar Daddy commercials. He was the color commentator on CBS Radio for the playoff and World Series. In recent years, he has appeared on "Married With Children," "Who Wants to be a Millionaire?" and with Joe Morgan appeared on the "Ellen" show with George Clooney. He remains a popular figure making personal appearances across the country.
Posted by Dean Family at 10:50 PM