Recently, I received a couple of emails regarding a photo link I posted on my J.R. Richard post back in June.

The photo in question is this: 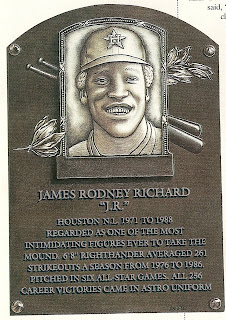 For the record, I did not create this image, nor do I have the ability to produce similar for other players. Believe me, I wish I could as this is really cool. This was originally part of a Sports Illustrated article. The edition was billed as "A Special Classic Edition" and had a date of July 19, 1993.

The article itself was entitled "What Might Have Been" and was written by Steve Rushin. It focused on Ken Hubbs, Fidel Castro, Casey Stengel and of course, Richard. The illustration is by Peter Angelo.

Here is the text copied from that article:

When Los Angeles Dodger manager Tommy Lasorda summoned someone - anyone - on his bench to pinch-hit against James Rodney Richard, strong men averted their eyes. Such temporary paralysis was common among Houston Astro opponents in the late '70s whenever the 6' 8" 225-pound Richard pitched. Players called the affliction J.R.-thritis.

Joe Morgan admitted fearing him. Dave Winfield still calls Richard the toughest pitcher he ever faced. Of stepping in against Richard's 98-mph fastball, Bill Buckner once said, "What you do depends on whether you value your life more than you value one at bat."

In midsummer of 1980 Richard was alone at the peak of his profession, a lock for the National League Cy Young Award, a starter in the All-Star Game, with 10 wins and a 1.89 ERA at midseason break. But on July 30, while working out at the Astrodome, he suffered a stroke and never pitched again in the major leagues.

In 1979, J.R. Richard won 18 games and he struck out 300 batters for the second time, something that on other National League righthander had ever done once. He also led the league with a 2.71 ERA. He was 29 years old.

From 1981 to '85 the Houston Astros had a rotation that would have made the current Atlanta Brave starting rotation look like slo-pitch softballers. The Astro staff consisted of Richard, a second banana by the name of Nolan Ryan, Don Sutton and a fourth starter who would win 221 games in his career, knuckleballer Joe Niekro. Houston mowed down opponents like a Toro.

In 1983 the Astros acquired a fifth starter named Mike Scott.

In 1986, in a timeless National League Championship Series, Houston beat the New York Mets. The Astros then dispatched the Boston Red Sox in what proved to be a surprisingly competitive Fall Classic. Richard the Lionhearted, 36 years old, started Games 1, 4 and 7 for Houston. Three Red Sox regulars missed those games with "flulike symptoms." (Alas, the aforementioned Buckner was not one of them.)

In 1989 Ryan was signed by the Texas Rangers and, with the shadow of Richard finally removed, at last received the national attention he deserved.

In 1993 J.R. Richard was elected to the Hall of Fame on the first ballot. He might have been the greatest pitcher ever.
Posted by Dean Family at 5:15 PM