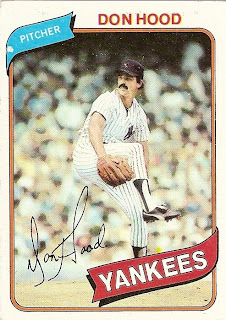 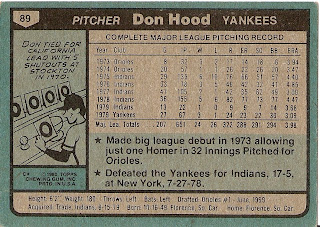 Who is this player?
Don Hood, relief pitcher, New York Yankees
A veteran lefthander, Hood began the 1979 season as a member of the Cleveland Indians. He was obtained by the Yankees in early June, who were in need of relief pitching. Closer Rich Gossage had broken his hand in a clubhouse brawl, and Hood was acquired to help patch the hole. He pitched well for the Yankees, occasionally starting, but was not offered a contract and left New York as a free agent. He was signed by the St. Louis Cardinals and pitched in a similar role. He was very effective throughout most of the season, but allowed 10 earned runs in his last two appearances.

Drafted in the first round in 1969 by the Baltimore Orioles, Hood quickly moved his way up the minor league ladder. Every season he was promoted to the next level, and by mid-1973, he was ready for the major leagues. In his debut, he pitched four innings of shutout relief against the World Champion A's, allowing only two hits. He pitched well down the stretch for the Birds, helping them win the AL East. He even appeared in the ALCS, albeit as a pinch runner. Hood and the Orioles again won the AL East in 1974, but in both seasons, the Orioles lost in the playoffs.

Prior to the 1975 season, Hood was traded to the Cleveland Indians, where he would spend the majority of his career. His manager there was Frank Robinson, who at the time was receiving national attention as the first black manager in baseball. Robinson made Hood a starting pitcher. Don would alternate between starting and relieving throughout most of his tenure in Cleveland.

Hood was not on a major league roster for the 1981 season, as he spent the entire season at the Royals Triple-A affiliate in Omaha. His work there eared a return to the majors in 1982 where he pitched effectively out of the Royals bullpen for two seasons. His career came to an end after the 1983 season and 10 years in the majors. He finished with 34 wins and a career ERA of 3.79.

Why I love this card
The "So. Car" designation on the back of his card under 'Born' and 'Home.' I don't think that I have ever seen South Carolina referred to that way and still can't understand why they just didn't use "S.C."

Something else....
I couldn't find anything on Don Hood's post-baseball career. I would be most appreciative if someone had an update on what he is up to now.
Posted by Dean Family at 11:18 AM