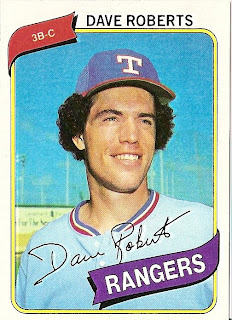 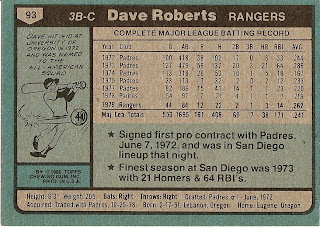 Who is this player?
Dave Roberts, utility player, Texas Rangers
In 1979, Dave Roberts was splitting time between Triple-A and the Texas Rangers and was struggling to find a full-time spot on a major league roster. In 1980, mainly due to his versatility and injuries to other players, he appeared in the most games in four seasons. He played in every position except pitcher that season but hit only .238. The Rangers did not seek to resign him when the season ended but the Houston Astros signed him to a five-year $1.3 million dollar contract.

A star at the University of Oregon, Dave Roberts was the first overall draft pick in the 1972 amateur draft. He signed with the San Diego Padres on June 7, 1972 and made his major league debut later that day. In his first three weeks in the majors, he broke up a no-hitter, hit his first home run and collect four hits in one game. Despite not being on the Padres roster for the first two months of the season, he was fourth on the team in runs scored and base hits. He initially didn't make the club in 1973 but was quickly recalled. Roberts proceeded to have his best and last good season, hitting .286 with 21HR and 64RBI. His future appeared to be bright.

He nagging back injury ruined his 1974 season in which he batted a meager .167 in 116 games. His poor performance led to only a handful of appearance with the Padres in 1975 as he spent the majority of the season at Triple-A Hawaii. The Padres left him off the 40 man roster completely in 1976 and he spent the entire year in the minor leagues. While in the minors, he attempted to rejuvenate his career by learning how to catch. At the end of the season, he was traded to the Toronto Blue Jays who only kept him for four months and returned him to San Diego before the 1977 season began.

Roberts was a backup catcher for most of the 1977 & 1978 seasons behind Gene Tenace. After the '78 season, the Padres finally gave up on him and he and Oscar Gamble were traded to the Texas Rangers. When he signed his multimillion dollar contract with the Astros prior to the 1981 season, it was widely seen as a questionable contract for a part-time player, but it was a harbinger for the changing economic times in baseball. Nevertheless, 1981 brought Roberts only postseason appearance, in the NLDS against the Los Angeles Dodgers. Despite his contract and ability to play many positions, the Astros traded him prior to the 1982 season to the Phillies, Dave's last campaign in a 10-year career.

Something else....
Roberts' multi-million dollar deal with the Astros may have changed course of baseball history. During this era, the Astros had signed many free agents, Roberts, Nolan Ryan, Don Sutton. By doing so, they lost a draft pick in the amatuer draft for each free agent signed. One that they had their eye on in 1981 was a outfielder named Tony Gwynn. Houston wanted Gwynn badly, but did not have a pick in that draft due to their signing of Roberts. Gwynn wound up a San Diego Padre. The rest is history.
Posted by Dean Family at 9:07 AM