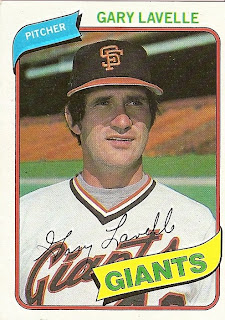 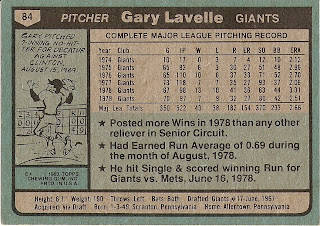 Who is this player?
Gary Lavelle, closer, San Fransisco Giants
While this era of Giants baseball was marked by disappointment and turmoil, Gary Lavelle was very quitely in the midst of a career as a solid relief pitcher. In 1979, the left-hander saved or won 27 of the Giants 71 wins. He entered the 1980 season as their closer, but he had a rough April and lost the closer's job to Greg Minton. By the end of the season, even though he pitched well in the second half, the top lefty out of the bullpen would be Al Holland.

Drafted as an 18-year old by the San Francisco Giants in 1967, Lavelle paid his dues by serving eight season in the minor leagues before getting a late-season callup in 1974. Almost immediately, Lavelle became an integral part of the Giants bullpen alternating between setup and closer for the next ten seasons. He was durable as well, appearing in 65 games in each of his first two seasons.

In 1977, he was selected to his first All Star Game and set team records for appearances and saves. Reds manager Sparky Anderson called Lavelle the best lefthander reliever that he had seen "in the last 10 years." The following year, the Giants surprised the baseball world by contending late into the season and Lavelle led his league in relief wins with 13. During that period Giants players also made headlines for being one of the first professional clubs to speak openly about religion. Led by Lavelle, the "God Squad" was a born-again group that was the first of its kind in Major League Baseball.

Lavelle's durability and versatility would lead to a setup role and the Giants would challenge for NL West in 1982. The following season, he was named again to the National League All Star team as he and Minton would both earn 20+ saves for the Giants. By 1984, he pitched in at least 60 games every season for the Giants with the exception of the 1981 strike season and still holds the franchise record for pitching apperances. In 1985, the Giants traded him to the Toronto Blue Jays, who were in need of a left-handed setup man. He helped lead the Blue Jays to their first ever playoff appearance.

The following season, he suffered an elbow injury and missed the entire season. He was only the third pitcher ever to undergo Tommy John surgery. However, he did not pitch effectively with the Jays in 1987 and was released near the end of August. He was quickly signed by the Oakland A's where he finished out his 13-year career. After pitching, he was the pitching coach for the New York Yankees, but lately has been involved at the high school level, winning multiple state championships at Greenbrier Christian Academy. He is also instrumental in coaching young players and running his own baseball academy.

Why I love this card
For the look at Candlestick Park in the background. In this card Lavelle is surrounded by the orange seats along the third base side. As a kid, I never got a chance to see some of the west coast stadiums in color. The Giants, Padres, Mariners and A's games were rarely on TV and occassionally you would see a shot (albeit briefly) on This Week In Baseball. These cards were literally the only chances you had to see some of these stadiums if you didn't live there.

Something else....
Born in Scranton, Pa., Lavelle is from the same region that produced the greatest Giants pitcher of all, Christy Mathewson.
Posted by Dean Family at 9:44 PM