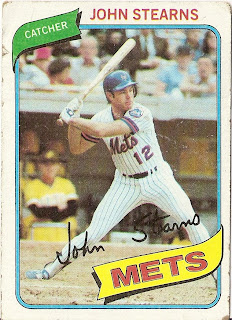 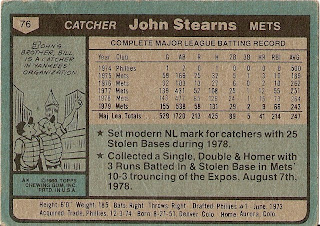 Who is this player?
John Stearns, catcher, New York Mets
1980 brought a new hitting approach for John Stearns, as he completely stopped hitting for power. In fact, he went the entire season without a home run, but his batting average rose. Instead of struggling to stay around .250, his average was over .300 and he was selected to his third All Star Game. His 1980 season was also highlighted by two other incidents, a brawl with the Montreal Expos and his getting involved physically with two spectators who found their way on the field. A broken finger on a foul tip in late July prematurely ended his season.

Stearns was a hard-playing catcher that was a two sport star at the University of Colorado. In addition to leading the NCAA in home runs he played in four bowl games as a defensive back and was drafted by the Buffalo Bills. When the Philadelphia Phillies made him the second overall pick in the 1973 draft, he chose baseball and he made is major league debut a little more than a year later. However, with Bob Boone firmly entrenched as the Phillies catcher, Stearns was involved in the trade with the Mets that brought Tug McGraw to Philly.

He spent 1975 as the backup catcher behind veteran Jerry Grote and batted only .189. The following season, he again hit poorly in limited time and was sent back to AAA Tidewater. Stearns returned in September on a hot steak that eventually led him to becoming the Mets starting catcher for good. His hard-nosed football approach to his catching duties made him a fan favorite and produced some memorable incidents.

In the midst of a slump in 1977, he chased Atlanta Brave mascot, Chief Noc-A-Homafrom the field. In the following years, he triggered a brawl with Montreal when he slammed Gary Carter in a home plate collision. He also broke Dave Parker's cheekbone in another collision. In his athletic career Stearns was alternately known as "Mad Dog" and "Bad Dude." Opponents around the league learned that this reputation was well earned.

His finger injury forced Stearns to begin 1981 on the DL and turned in a solid season. He returned to the All Star Game as the Mets representative in 1982. Tendinitis set in his elbow later that year and it ultimately ended his career. His playing career came to and end after the 1984 season and 11 years in the majors. Stearns followed a common path following his active career; he was a broadcaster and coach. He was the Mets bench coach when the team went to the World Series in 2000 and is currently the manager of the Harrisburg Senators in the Washington Nationals chain.

Why I love this card
I'm not sure if the scan picks this up, but wow, what bad shape this Stearns card is in. I'm sure that I must have obtained this card early in my collecting career when condition was absolutely not a factor. I watch my own son handle his cards today in the same fashion - no thought whatsoever on "mint" or "PSA" dribble. It's all about looking at, reading, playing with the cards.

Something else....
76 cards in and we have already covered all of the Mets; "stars" of this era; Stearns, Doug Flynn, Lee Mazzilli and Craig Swan. In looking ahead at the remainder of Mets to come - its pretty scary.
Posted by Dean Family at 10:32 PM