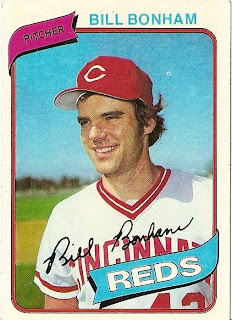 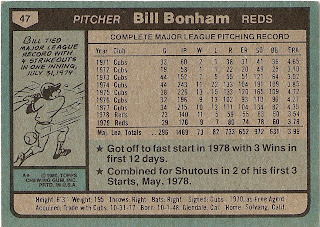 Who was this player?
Bill Bonham, starting pitcher, Cincinnati Reds
The Reds were penciling in the right-handed Bonham as their #4 starter in 1980, a similar role that he filled in 1979 when he won nine games for the NL West Champions. There was some concern about Bonham’s shoulder as he missed three weeks in 1979 with soreness. Arm problems would continue to plague him in 1980 as he only appeared in four games and was unable to return to the major leagues.

Bonham was originally drafted by the Chicago Cubs in 1970 and made the pitching staff the following season. His debut was rather auspicious as he walked three and allowed four runs without retiring a batter. He spent the season pitching unspectacularly out of the bullpen. The following year he began the year in AAA before being recalled in mid-year and pitched well in 1972 and again in 1973, primarily as a swingman.

His career as a starter in Chicago was one of extremes. He earned a spot in the starting rotation for the 1974 season and he and was the team’s Opening Day starter. However, he would lead the majors in losses (22) that season, despite his 7.07 strikeouts-per-nine-innings, third best in the NL. Also that year, he accomplished the rare feat of striking out four batters in one inning, while his eight balks tied what was then the ML record.

The following season, he set a ML record when he allowed seven consecutive hits to start the game, yet he achieved a career high in wins (13). In 1977, Bonham was on the mound for one of the worst half-innings of defensive play in baseball history. Facing the Cardinals in Busch Stadium, Bonham faced Lou Brock, Garry Templeton, and Tony Scott in the first inning. Each of the speedsters bounced the ball into the turf and beat out errant throws to first base. Before the debacle was over, five errors had been charged to the Cubs, two to Bonham, and Cubs made seven overall.

A trade to the Reds in 1978 jump-started his career, and he immediately helped their rotation winning 11 games his first year despite bone chips in his elbow. Arm problems began to plague him the following season as the Reds won the NL West and again during 1980. Although he attempted a comeback in the minors, he never pitched again in the majors after 1980 and ten seasons.

Why I love this card
The optimism on Bonham's face. Granted, this may be a token spring training shot, but it does look as if Bonham is truly enjoying his status as a major league pitcher. Hair flailing from under his cap, he doesn't appear to have a care in the world. Sad foreshadowing that this would be his last season in the big leagues. Sorry for the downer folks.

Something else...
Bonham had a great quote to describe his major league debut in which he failed to record an out: "I guess I was due for a bad outing." You would almost think he was a lefthander. This card is also the 4th double printed card.
Posted by Dean Family at 9:22 PM