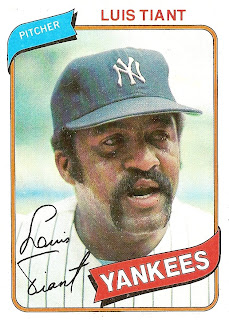 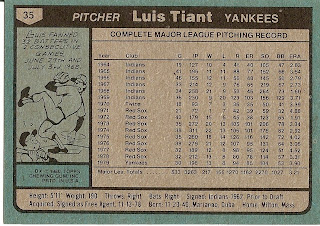 Who was this player?
Luis Tiant, starting pitcher, New York Yankees
“El Tiante” had just completed his first season in pinstripes in 1979, winning 13 games. While his best days were behind him, he was slated to again be the #4 starting pitcher on the Yankees in 1980. He finished the year 8-9 with the highest ERA in his career.

Born the son of a Negro League legend, pitching success seemed all but destined for Luis Jr. Under the recommendations of former AL batting champion Bobby Avila, Tiant was signed by the Cleveland Indians in 1961. Tiant progressed through the Indians farm system and Tiant debuted in 1964 with a four-hit, 11 strikeout, 3–0 shutout victory against the defending AL Champion New York Yankees at Yankee Stadium. Making the debut sweeter was the fact that it was against future Hall of Famer Whitey Ford. Tiant finished his rookie season with a 10-4 record, 105 strikeouts, and a 2.83 ERA in 19 games.

In 1966, Tiant tied a major league record when he pitched four straight shutouts, and in the “Year of the Pitcher” 1968, started the All Star Game and posted the lowest ERA in the AL since the dead ball era. It was also in 1968 that Tiant perfected the delivery that would make him famous. An injury filled 1969 brought about a trade to Minnesota and another injury in 1970 threatened to end his career. Without a team, the Boston Red Sox took a chance on Tiant and signed him in 1971.

Tiant rebounded in 1972 to again lead the AL in ERA, shutouts in 1974 and won 20 games three times in four seasons. In 1975, with his father watching from the crowd, he won two games in the World Series, a famous encounter that saw the Sox lose in seven games to the Cincinnati Reds. After the 1978 season that saw Boston famously blow a huge lead in the AL East, Tiant was not offered a contract and he signed with the New York Yankees. He did not appear in the ALCS with the Yankees in 1980 and two years later, his 19 year career came to an end.

In his post-baseball career, he has produced line of a cigars, and has hosted a golf tournament to raise money for diabetes, a condition he was diagnosed with in 2004. He has also been elected to the Boston Red Sox Hall of Fame

Why I love this card
Tiant in a Yankee uniform. Today, I can’t imagine him in anything else but a Red Sox cap twirling and willing himself to victory during the 1975 World Series. It is almost forgotten today that a generation before Wade Boggs and Roger Clemens left Fenway for the Big Apple, El Tiante did it first. Still weird seeing him as a Yankee.

Something else....
Tiant is the subject of the documentary film "The Lost Son of Havana", produced by Kris Meyer and the Farrelly brothers, and directed by Jonathan Hock. It had its world premiere on April 23 at the 2009 Tribeca Film Festival, and was promptly acquired by ESPN Films.
Posted by Dean Family at 8:29 PM