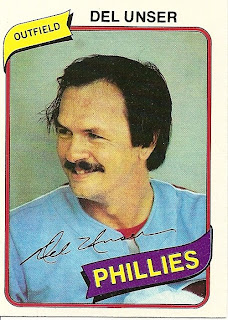 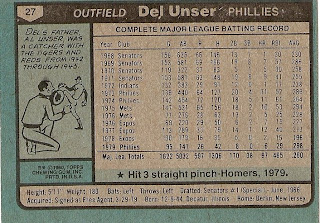 Who was this player?
Del Unser, utility player, Philadelphia Phillies
Unser's 1979 season was previewed in a previous blog for his "Highlights" card. I won't recap that again here.

Born the son of a major league catcher, Delbert Bernard Unser enjoyed a 15-year career with five teams, primarily with the Phillies. Unser broke in with the Washington Senators in 1968 and won the Sporting News Rookie of the Year award that season. The following year, he led the American League in triples and was ninth in the league in hits. Unser was the Senators regular center fielder for four seasons before he was traded to the Cleveland Indians in 1972 and was the Phillies CF in 1973 and 1974.

He was part of the trade that brought Tug McGraw to Philly when he was shipped to the Mets in 1975. In New York, he reached his career best in batting (.294) but was traded again in mid-season 1976, this time to the Montreal Expos. It was in Montreal that Unser's playing time as a regular began to diminish. He went back to the Phillies as a free agent for the 1979 season.

After establishing himself as a record-setting pinch-hitter, he helped the Phillies win the World Series in 1980. In the decisive Game Five of the LCS, he went 2-for-2 after coming in as a pinch hitter and then staying in the game, and he drove in a run and scored two, including the game winner in the tenth inning. In Game Two of the World Series, he hit a pinch double off Royals relief ace Dan Quisenberry in the Phillies' eighth-inning come-from-behind rally. In Game Five, another pinch double off Quisenberry in the ninth inning tied the game; Unser moved to third on a sacrifice fly and scored the game winner on an infield single. Unser retired after the 1982 season.

Why I love this card
The previous post, I commented on Marty Pattin's hat. With this card, Unser is the first player featured to not be sporting any headwear. While Unser doesn't sport the traditional 1970s hairstyle it does have a REO Speedwagon look to it.

Something else...
Unser threw out the ceremonial
first pitch at the first game of the Washington Nationals. It was fitting since Unser began his career in Washington, and Nationals were the recently transplanted Montreal Expos (another of Unser's former teams). To complete the theme, the Nationals were hosting the Philadelphia Phillies.
Posted by Dean Family at 11:33 PM