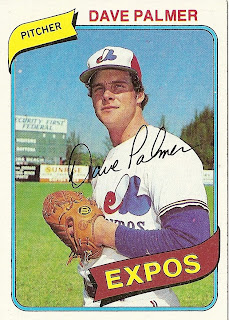 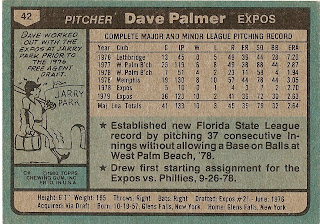 Who was this player?
David Palmer, relief pitcher, Montreal Expos
Palmer was a 22-year old right-handed pitcher coming off his first full season as 1980 began. He had pitched well for the Expos in their failed bid for the NL East in 1979, winning 10 and saving 2 with a 2.64 ERA. Though primarily a spot starter and reliever in 1979, he would be tried out in the rotation for the 1980 season as the Expos prepared to challenge for the division crown.

Drafted out of Glen Falls High School, Palmer was a high school teammate of another future MLB pitcher, Dave LaPoint. He rose through the Expos system as a starter, consistently posting a good ERA. He made his debut as a September call-up in 1978 and also made his first start.

He made a strong impact on the Expos pitching staff in 1979 and was inserted into the Expos starting rotation in May of 1980. Near the end of the summer, he suffered an elbow injury that limited his effectiveness for the remainder of the season. The Expos were narrowly edged by the Phillies for the NL East flag on the final weekend. The injury kept Palmer sidelined for all of 1981 as the Expos finally won the National League East.

Palmer finally returned to the Expos in May of 1982 and pitched well while healthy. He injured his elbow again near the end of the summer and was shelved for the rest of the season and all of 1983. He returned in 1984 and in his second start of the season pitched a perfect game in a rain-shortened game. Injuries again slowed his 1984 season and as the Expos fell out of contention, Palmer pitched well but with a losing record.

Why I love this card?
Other than the prominent display of the Expos logo on Palmer's jersey, and the Jarry Park reference, I love the scoreboard in the background. Security First Federal as a sponsor and the fact that the hometeam is Daytona. I like being able to pick out the background on a card.

Something else....
It took a while, but Palmer's card is the first appearance of a desireable "rookie" card in this set. Rookie cards would become huge in the 1980s and change the face of the hobby. Indeed, this set is most known for one rookie card in particular. Palmer's is the first one that we see.
Posted by Dean Family at 9:44 PM