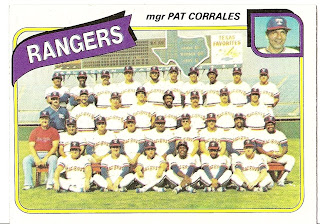 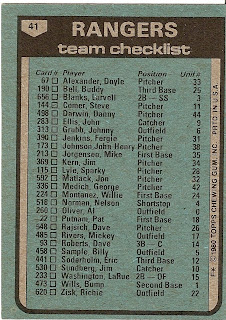 Pat Corrales was the 38-year old skipper of the Texas Rangers in 1980; a team looking to achieve status as contenders in the American League West. A third place finish in 1979 made pundits weary of the Rangers chances in 1980, but most felt that Texas could be a formidable team.

They addressed one of their biggest needs prior to the season by trading for pitcher Gaylord Perry to strengthen the starting rotation, historically a Ranger weakness. Question marks surrounded staff ace Jon Matlack and his ability to return from injury, but the bullpen was solid headed by All Star Jim Kern and former Cy Young winner Sparky Lyle.

The batting order was a mixture of youth and veterans, led by 1980 All Stars Al Oliver (.319 19 117) and Buddy Bell (.329, Gold Glove) Outfielder Mickey Rivers (.333, 210 hits) came through with a great season. Other veterans were catcher Jim Sundberg (Gold Glove) and Richie Zisk (.290 17 77). Bump Wills and Pat Putnam were seen as coming stars. Rusty Staub was added in spring training to provide veteran leadership.

Alas, it was not to be. The bullpen was erratic, there was no regular shortstop and the hitting was inconsistent. By summer, the Rangers found themselves behind by double digits in the standings. Perry and Lyle were traded and Fergie Jenkins was arrested in Toronto in August for possession of cocaine. Dissention began brewing between the front office and the ballplayers. The Rangers finished the 1980 season 76-85 in fourth place, closer to last than to first. Corrales was fired at the end of the season.

Why I love this card
The Arlington Stadium scoreboard in the background, complete with the state of Texas auxiliary. I can’t tell what the advertisement next to it is for, but the fact that it says “Texas Favorites” adds a nice touch to the card.

Something else.....
After Corrales was fired, the Rangers had an 11-player trade that essentially came down to Richie Zisk for Rick Honeycutt. Honeycutt would lead the league in ERA in 1983, but the Rangers traded him too, this time to the Dodgers.

Longtime Ranger Charlie Hough joined the team in 1980 in June after his contract was purchased from the Los Angeles Dodgers. The Rangers also drafted future Blue Jays closer Tom Henke in the amateur draft also in June.
Posted by Dean Family at 5:02 PM