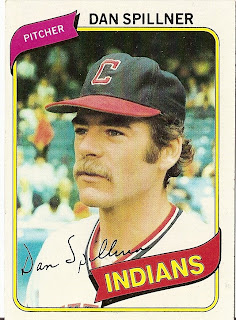 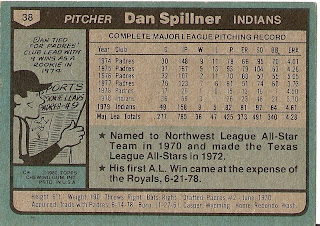 Who was this player?
Dan Spillner, starting pitcher, Cleveland Indians
Spillner was a versatile spot starter and long reliever for the Indians in 1979, but manager Dave Garcia inserted him into the starting rotation for 1980 and he was the team’s Opening Day starting pitcher. He responded with a career high 16 wins, good for 10th in the American League that season.

Originally drafted by the San Diego Padres, Spillner was a hard throwing right hander from the Pacific northwest. The pitching-starved Padres brought him up to the big club in 1974 and he made his major league debut in June at the Astrodome. He finished his rookie year with nine victories, which led the club.

He started out part of the Padres rotation in 1975, was moved to the bullpen after a series of bad starts and back into the rotation to finish the season. Back surgery derailed his 1976 campaign, the only time in his 12-year career that he was placed on the disabled list. He returned strong in 1977, appearing in a career high 76 games and posting a 3.73 ERA. He was one of three relievers on the Padres that year that appeared in over 70 games.

Inexplicably, he was traded to the Indians in June of 1978. It was during this time in Spillner’s career that he helped define the role of a designated long reliever. He was so dependable in this role, it led to his promotion to the Indians rotation in 1980. While Spillner’s ERA was very high (5.25), he did provide thrills, even losing a no-hitter in the ninth inning.

His high ERA and the acquisition of Bert Blyleven had him returned to his familiar long relief role the following year, and in 1982, he was the Indians best reliever, winning 12, saving 21 and posting a 2.49 ERA. He was traded to the Chicago White Sox during the 1984 season and despite his durability and versatility, he did not receive any free agent offers following the 1985 campaign. He reluctantly retired at 33 years old.

Why I love this card
Spillner's moustache. That is a ballplayer's moustache. Nothing more needs to be said about the awesomeness of it. This is also the fourth of 66 cards that were double printed that season.

Something else....
In retirement, Spillner worked with Little League kids and as a construction worker. Collusion by the owners in the mid 1980s prevented him from getting a contract and in 1995, Spillner was awarded a $486,000 settlement for being frozen out of the big leagues by owners attempting to control salaries.
Posted by Dean Family at 9:59 AM