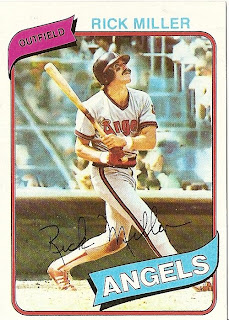 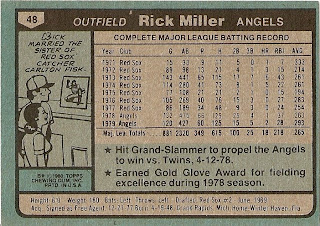 Who was this player?
Rick Miller, centerfielder, California Angels
In addition to centerfield, the left-handed hitting Miller was often times the leadoff batter for the defending AL West Champion California Angels. As the Angels looked to return to the postseason in 1980, Miller was looked at as the defensive captain of the outfield and the table setter at the top of the order. Unfortunately, injuries doomed the Angels as they lost 95 games and finished sixth.

Hailing from Grand Rapids, Michigan, Miller was invited to a pre-game workout with the Detroit Tigers in the summer of 1966. Along with a fellow Michigan high school standout, Ted Simmons, where he had the chance to meet his boyhood hero Al Kaline. He went to Michigan State University and was drafted by the Boston Red Sox in 1969. Miller was called up for the final 15 games with the Red Sox in 1971, and he played reserve roles in the outfield. He wound up going 11-for-33 with a home run, batting .333 in the month of September.

In 1972, Miller played in 89 games, but usually as a late-game defensive replacement in center field. He hit three home runs with a .214 batting average. His efforts were recognized as Miller was also named Red Sox' "Unsung Hero of 1972" by the Boston Baseball Writers Association. Miller became the regular in centerfielder in 1973, but the arrival of Fred Lynn and Jim Rice in Boston moved Miller back to the bench. He appeared in a reserve capacity for the Red Sox in the 1975 World Series.

However, Miller wanted to play everyday, and he signed a free agent contract with the Angels in 1978. In his first year in Anaheim, he was awarded with a Gold Glove award and was in the postseason in his second, batting a career high .293. After the Angels disastrous 1980 season, he was traded back to the Red Sox where he would spend the remainder of his 15-year career. He was the regular starter in center in 1982 and 1983, but moved to the bench again when the Sox acquired slugger Tony Armas. At this stage in his career, Miller became one of the most dangerous pinch hitters in the league, ranking high among the leaders in the pinch hits and average.

Most recently, Miller was manager of the independent Nashua Pride in 2008. The team folded after the season and Miller did not follow the team when it became the American Defenders of New Hampshire.

Why I love this card
It's the first in action shot in a while and it captures Miller in full swing. Miller has every late 1970s/early 1980s accoutrement of the typical baseball player. Eye black? Check. One batting glove? Check. Wrist bands? Check. If Miller was photographed in the field, I'm sure that he would have had flip up shades.

Something else....
As mentioned on the back of this card, Miller married the sister of Red Sox teammate Carlton Fisk. Interesting that they are only 8 cards apart. More interesting is the depiction of Miller's wife/Fisk's sister. Is there a Jessica Rabbit thing going on here? Shame on you for clicking.
Posted by Dean Family at 8:44 PM