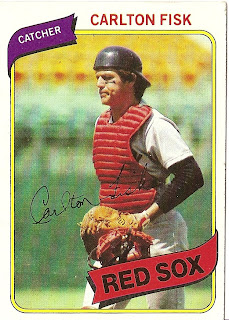 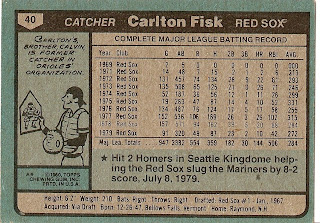 Carlton Fisk, catcher, Boston Red Sox
Hall of Famer, Class of 2000
In 1980, Carlton Fisk was already a perennial All-Star, if not the best catcher in the game. The New England-raised Fisk was already a hero in Boston and he suffered and injury-shortened 1979 season. 1980 would be his last year in Fenway as a clerical error following the season allowed him to leave via free agency. He would go on to catch the most games in major league history.

Fisk was a four-decade player, breaking in with the Red Sox in 1969. He was the American League Rookie of the Year in 1972, leading the league in triples and won his first Gold Glove. In 1974, Fisk suffered a devastating knee injury. Many believed the torn ligaments would end his career. Injuries continued as he did not make his 1975 debut until June 24 due to a broken thumb but he helped lead the Red Sox to the AL pennant.

As everyone knows, Fisk is most famous for his Game 6 home run in the 1975 series. The image of him waving the ball fair changed the way baseball was televised. During this time, cameramen covering baseball were instructed to follow the flight of the ball. In a 1999 interview, NBC cameraman Lou Gerard admitted that the classic shot was not due to his own skills as a cameraman, but rather because he had been distracted by a nearby rat. Unable to follow the ball, he kept the camera on Fisk instead.This play was perhaps the most important catalyst in getting camera operators to focus most of their attention on the players themselves.

Fisk became a free agent when he wasn’t offered a contract for the 1981 season on time by Boston management. After joining the Chicago White Sox, he helped the team win its first AL West title in 1983. After injuries reduced his playing time in 1984, he began a new training program which he would use for the rest of his career. In 1985, he came back to hit a career best 37 home runs and 107 RBI. Fisk often credited the training program to extending his career. There was quite a controversy in 1986, when the White Sox decided to put Fisk in left field. The White Sox had a plethora of catching arms, and that may have been the reason. However, Fisk had rarely played outfield before and was there for only 31 games, during which he made 4 errors. As he settled into a position of elder statesman, he took his role seriously, not just for teammates, but for the opposition. He was named an All Star for the final time at age 41 in 1991 and retired two years later.

In 2005, Fisk was feted at Fenway Park where the left field foul pole was renamed "Fisk Pole." Also, a statue of Fisk was unveiled in August 2005 at Comiskey Park in Chicago. His number #27 has been retired by the Red Sox as has his #72 with the White Sox.

Why I love this card
When I think of Fisk, this is the image I have of him. Hard nosed, intense, almost pissed off. You didn't see Fisk smiling or posing on his baseball cards, it was if the camera man had to catch him on the field or not catch him at all. The current statue at Comiskey Park captures this exact image of Fisk.

Something else...
Our second Hall of Famer so far in the 1980 set. This post also sets the record for most links within the texts. Enjoy!
Posted by Dean Family at 9:04 PM