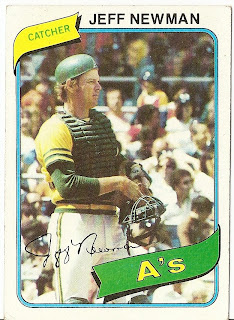 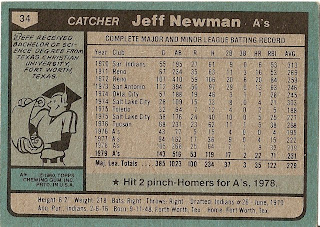 Who is this player?
Jeff Newman, catcher, Oakland A’s
Newman was the starting catcher for the A’s and their lone All Star representative in 1979. During the off-season, there was speculation that the A’s would move to Denver, talk that ended once Billy Martin was named manager. Newman was slated to be catcher, but would also play first base and outfield.

After six seasons in the minors, Jeff Newman was ready to give up the game until the Oakland A’s purchased his contract from the Cleveland Indians. He almost immediately made his major league debut the next season for an A’s team that would finish the year in 2nd place after five straight AL West titles.

The decline of the A’s dynasty corresponded with Newman’s increase in playing time. Since becoming a semi-regular player in 1977, the A’s lost at least 90 games the next three seasons, topping out at 110 losses in Newman’s 1979 All Star season. The A’s rebounded in 1980 under new manager Martin and finished in second place. Newman split time between first base and behind the plate.

The A’s won the AL West in 1981 and played the Yankees in the League Championship Series, a season that saw Newman’s power numbers drop drastically. He failed to get a hit in nine post-season at bats and the A’s lost the ALCS in three straight games. After struggling to hit .200 in 1982, the A’s traded Newman (along with Tony Armas) to the Boston Red Sox for the 1983 season. He assumed a substitute role in Boston and after nine seasons in the majors, retired after the 1984 campaign.

Why I love this card
If there was ever to be a card to feature an All Star catcher, this is it. Newman is sporting the half helmet and old school mask. Two for two on the team name pennant being the correct colors as it blends perfectly with Newman’s road uni.