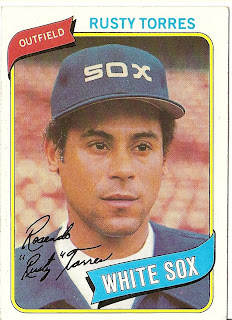 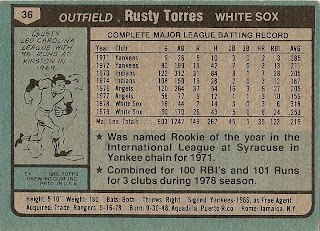 Who was this player?
Rusty Torres, reserve outfielder, Chicago White Sox
Rosando “Rusty” Torres was a defensive specialist in the outfield . He was released by the White Sox as spring training was coming to an end in 1980, and he signed on with the eventual AL Champion Kansas City Royals. He did not finish the season in Kansas City as he was released shortly before September callups.

Because of his defensive mastery, Torres was able to find a space in the outfield for three different teams, the Yankees, Indians and Angels. As a regular player, however, his batting average never rose above .211. However, Torres is most remembered for being in uniform at three of the most infamous games of the 1970s.

The first was the final game of the Washington Senators:
On September 30, 1971, the Washington Senators were leading 7-5 with two outs in the top of the ninth and Torres was in the on-deck circle. In a 2007 interview, Torres gave his view of the situation: "Bobby Murcer hits a ground ball. He gets thrown at first. They thought it was three outs. It was only two outs. And they rushed us! They rushed the field. They took dirt. People were taking dirt, taking the bases. They were tearing up the seats. It was unbelievable. That was a real scary experience. Thankfully, none of us got hurt."

The second was 10-cent Beer Night:
Torres did not start the 1974 game, but was inserted as a pinch hitter. With the game tied the game at 5-5, and Torres (now with the Indians) on second base, the inebriated crowd took over. After Texas outfielder Jeff Burroughs violently reacted to a fan stealing his glove, hundreds of fans poured into the outfield, many of them throwing whatever they could lay their hands on, even several chairs. As a result, the head umpire forfeited the contest to the Rangers—the same franchise, of course, as the old Senators.

The third was Disco Demolition Night:
This time, at least, Rusty wasn't on the field when the madness started. The first game had ended and Torres who had started in right field, singled and scored the Sox' only run in the 4-1 loss, was in the dressing room when disc jockey Steve Dahl "blew up" a box of disco records. Thousands of fans overran the field, which was eventually cleared by police in riot gear. Tigers’ manager Sparky Anderson refused to field his team citing safety concerns, which resulted in the forfeiture by the White Sox to the Tigers.

Why I love this card
Torres signs his complete name on this card. I am glad that he did, because nowhere else Topps acknowledges his given name, Also the appearance Torres as a White Sox here means that every MLB team has now been represented by at least one player.

Something else....
This is Torres final card as an active major leaguer.
Posted by Dean Family at 9:53 AM