Yesterday's post discussed the simplicity of baseball coverage during the regular season of 1980 and how that elevated the prominence of the All Star Game every summer. However, with the game in Los Angeles in 1980, the Hollywood crowd in southern California certainly had a presence although it was much more subdued than it is today.

Then as is now, Disney was represented mainly, I suppose, because of Disneyland's proximity to Dodger Stadium. However, this was not the same Disney juggernaut that runs the world today. It was a company in transition. Creatively, things were beginning to stall but that did not stop the folks at the Magic Kingdom from trying to put on a good show.

The cast of characters took the field prior to the start of the game in a series of short songs designed for the viewing audience at home. It culminated in a rendition of "Take Me Out to the Ballgame" that was led by Mickey Mouse, in full Dodger regalia: 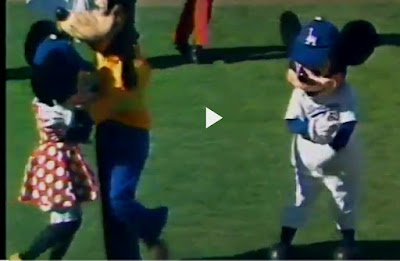 As the ABC cameras panned the action on the field, there were several curious observations to be made as apparently all the Disney characters were wearing MLB caps. Some of these characters may not be as immediately recognizable to some younger readers but were stars of some of Disney's most recent efforts.

There were Bernard and Miss Bianca from "The Rescuers" (1977), in St. Louis Cardinals and Pittsburgh Pirate caps. 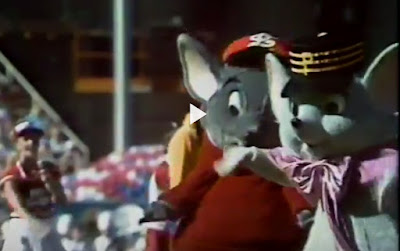 Also shown were Little John and Prince John from 1973's Robin Hood. Little John is featured in a Philadelphia Phillies cap and Prince John is dressed in the emperor's garb from "The Emperor's New Clothes." To accentuate the royal garb they put him in.....a Cleveland Indians cap. 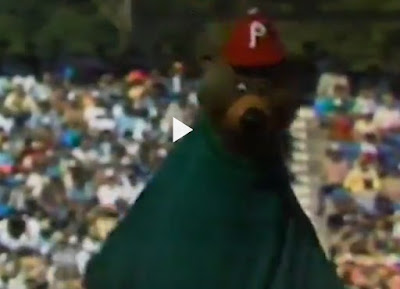 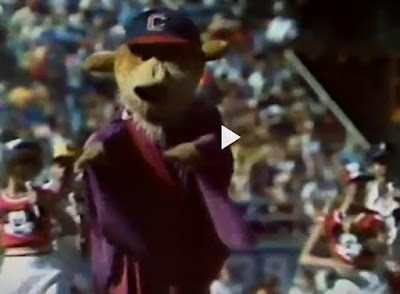 Also shown were Captain Hook (no, not Sparky Anderson) and Mr. Smee, from the 1953 film "Peter Pan." Not sure when the last time Mr. Smee has been seen at any of the theme parks since as a supporting character such as him likely has been retired. Appropriately, they are wearing Pittsburgh Pirates caps. 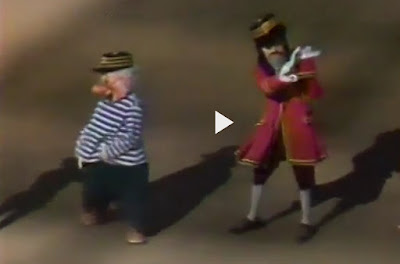 Several other characters appeared on the field, in difficult to determine caps. King Louie and Baloo from "The Jungle Book" appear, but from a distance, it's hard to make out their caps. Same with the Seven Dwarfs and Three Little Pigs. Some, such as Peter Pan, Alice in Wonderland and Snow White do not appear with a MLB hat at all.

One last screen shot encapsulates Disney during this period. Having characters in MLB hats is really, really cool. Yet opportunities are missed. Take for example this shot of Chip. Or Dale. Either way, both were rocking a sweet Montreal Expos hat. And yes, I am glad to revel in its splendor glory. But really you have two chipmunk characters that essentially look alike and don't make them the Minnesota Twins?? Nonetheless, a minor complaint to what was a combined totally awesome and horrendous pregame at the same time. 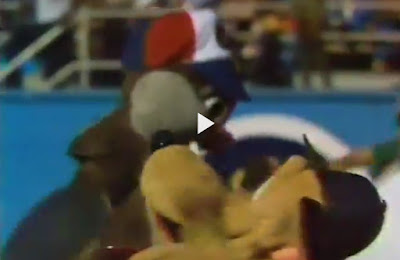