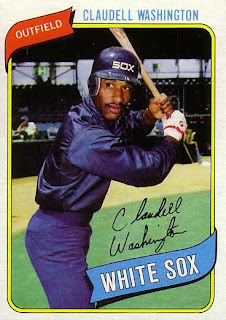 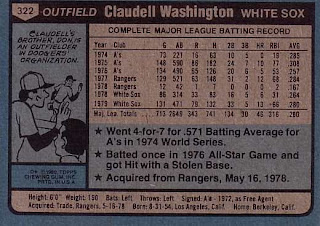 Who is this player?
Claudell Washington, rightfiedler, Chicago White Sox
Spring Training for Claudell Washington began with a contract dispute, and the miserly White Sox were not about to sign him to the multimillion dollar deal he was seeking. Already unpopular with White Sox fans who famously hung "Washington Slept Here" signs because of his casual style of play, it was widely believed that it would be a matter of time before he was traded. Indeed, the Sox shipped Claudell to the New York Mets for a minor league pitcher in June. He made history shortly after the trade, becoming (at the time) only the third player to hit three home runs in a game in both leagues on June 20 (he hit three in a game for the Sox in 1979). After the season, he signed the contract he was seeking with the Atlanta Braves, a five year deal worth $3.5 million dollars.

Washington's path to the major leagues was an unusual one. A very talented athlete, he spent most of his youth concentrating on basketball and track. He was working as a janitor while playing on the sandlots of Berkely, California when he was discovered and signed by the legendary A's owner Charlie Finley in 1972. Two years later, he was destroying minor league pitching when the A's brought him up shortly before the 1974 All Star break. After a few weeks getting acclimated, he hit .310 in the final month of the season and helped the A's to their third straight World Series, where he batted .571 (4 for 7) in a five-game victory over the Dodgers.

Handed the leftfield job in 1975, Claudell blossomed into a star and he became a favorite of Finley. He was selected to the All Star Game for the first time and finished fifth in batting and second in stolen bases. He struggled in 1976 as the A's dynasty disintegrated. In March of 1977 Finley peddled him to Texas for cash and two players. He never gelled with the Rangers, so when Texas had a chance to get Bobby Bonds they swapped him to the White Sox in May of 1978. His tenure in Chicago was described as uninspired and underwhelming after so much promise only three years previous.

The Braves gambled that with a long-term deal, Washington would blossom into a superstar. While he did help lead the Braves to the 1982 NL West title and was also named to the 1984 NL All Star team, Washington was a solid, if unspectacular outfielder. In six years with Atlanta, the most he would spend with any team, he hit a cumulative .278 and hit just 67 home runs. One of the possible reasons Washington put up such underwhelming numbers may have been due to a substance abuse issues that he had during these stages of his career.

He was traded to the Yankees in mid-1986 and had a fine year in 1988, hitting over .300 for a second time and playing solid outfield for a contending team. Claudell also earned the unique distinction of hitting the 10,000th home run in Yankee franchise history that season. His 1988 effort earned him his last big free agent contract, this time with the California Angels but his career quickly wound down after that. The final year of his 17-year career was 1990 when he hit .167 in 45 games with the Angels and Yankees.

Why I love this card
I loved this card, because of this card: 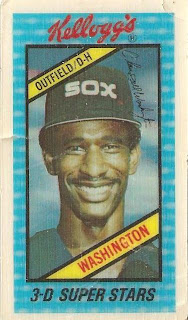 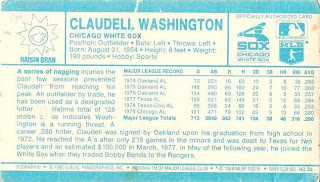 This was my first ever Kellogg's card and it came in the Spring of 1980. When I ended up getting his Topps card, I thought I was on to something special...after all, if you had a Kellogg's card, you had to be a superstar, right?

Something else....
In addition to being known as the player that Nolan Ryan has struck out the most (39 times), recently, Washington has been indentified as the player that hit the foul ball that Ferris Bueller caught in the 1986 movie. Ah, Retrosheet, you did it again.
Posted by Dean Family at 10:15 AM