A bit of explanation is probably in order.....

This blog has not been updated in almost a year. Along the way, there were many friends made and several folks who offered well wishes. I probably should have come on here sooner to update and it is amazing how quickly time can get away from you.

Last July, I had a computer crash and had to by a new one. My father, who is the inspiration for this blog, reminded me at the time that "there are more important things in life." It stuck me then, to take his words to heart. I'm glad that I did.

See, my Dad was living with cancer and emphysema. Over 50 years of smoking had taken its toll and in December 2008, he had a cancerous tumor removed from his lung. Fortunately, it did not return. However, effects of chemo and radiation exacerbated the emphysema and his breathing got worse.

Something told me last year to take a step back and focus on spending more time with him and my family. I am glad that I did.

Not knowing it at the time, there were alot of good memories along the way. He got to see his third grandchild born last July. He lived to his 70th birthday and got to tease his son when he turned 40. He watched his team, the Steelers, play in the Super Bowl one last time and didn't get mad when his grandson showed up wearing a cheesehead. We had one last Halloween, Thanksgiving, Christmas and Easter. We talked about sports, politics, entertainment and life in general. He shared with me things that I had never known about him before. And he died with his family around him the way he would have liked.

So on Father's Day, I return to this blog to begin again. I hope to be more frequent with my posts....life sometimes takes funny turns. If you don't mind, I will occasionally throw in a baseball-themed story or two that don't have much to do with 1980, but everything to do about my Dad.

Happy Father's Day Dad, we do miss you. 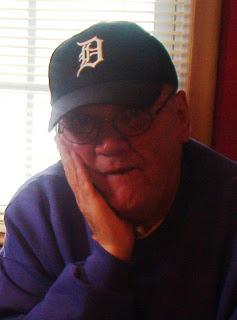