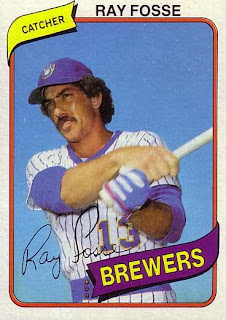 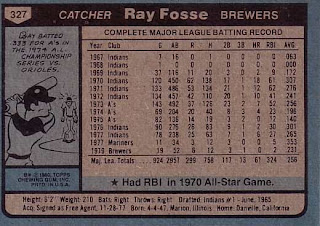 Who is this player?
Ray Fosse, reserve catcher, Milwaukee Brewers
As the 1980 season got underway, Ray Fosse was not on a major league roster. Six days before the Brewers broke camp, Fosse was cut in favor of Ned Yost. The free agent contract that he signed with Milwaukee prior to the 1978 season had other teams financially avoid him. He was unfortunately seen as too expensive to take a chance on at that point in his career. Fosse resigned himself to the fact that his 12-year career was at its end, taking a position in California with a commercial real estate firm.

A native of Marion, Illinois, Fosse was a heavily recruited high school athlete, especially by the Houston Astros. However, the Indians were part of a scouting co-op and drafted Fosse on the first round of the 1965 draft. Fosse's high school coach handled the negotiations with the Indians and Fosse eagerly signed a deal. He quickly moved up the minor league ladder and developed a reputation as a solid hitter and handler of pitchers. Ray earned the nickname "Mule" among his teammates for his strength and ability to carry a team when necessary.

He was derailed in 1969 when he broke his right index finger, but blossemed in the first half of 1970. By most accounts, Fosse was seen as a rising superstar. He was named to the All Star team, batting .313 with 16 home runs and was part of one of the most replayed All Star moments of all-time when Pete Rose crashed into him to score the winning run in the 12th inning. A fracture and seperation of his shoulder were never detected on the initial x-ray and Fosse gamely continued to play. He developed some bad habits during this stretch to compensate and since then, Fosse has gone one record that he never regained the power and the swing that he had prior to the All Star Game.

Fosse won consecutive Gold Glove Awars in 1970 & 1971 and was even named to his second All-Star squad, but a series of injuries cut into his playing time. The Indians traded Ray to Oakland before the 1973 season and with the A's, he won two World Series ring. He would suffer another serious injury in Oakland, breaking his neck while trying to be peacemaker in a locker room scuffle between Reggie Jackson and Bill North. He would never be a regular player again.

He returned to Cleveland in 1976 in a backup cacpacity and then was traded to Seattle the following season. He signed a free agent contract with the Milwaukee Brewers prior to the 1978 season, but he destroyed his knee in Spring Training, limiting him to only 19 appearances the next two seasons. After his retirement in 1980, Fosse became a broadcaster for the A's, a job that he has held since the 1986 sesaon.

Why I love this card
I remember when I got this card. I had no idea who Fosse was and asked my Dad who he was. I vividly recall his response as a sympathetic "Aww." I had no idea about the All Star collision and my Dad told me the story. I wouldn't go so far as to say that it turned me off to Pete Rose, but I do remember thinking more of Fosse than Rose every time I saw that play after that. Still do, in fact.

Something else....
Today, Pete Rose claims that he Fosse is angry with him about the play and doesn't know why. Maybe it has something to do with this.
Anyway, an interesting side note is that a week before the infamous All-Star Game, Fosse narrowly avoided serious injury when a fan at Yankee Stadium threw a cherry bomb on the field and in exploded near Fosse's foot. It was so serious in fact, that the Indians trainer initially thought Fosse was shot.
Posted by Dean Family at 8:57 PM