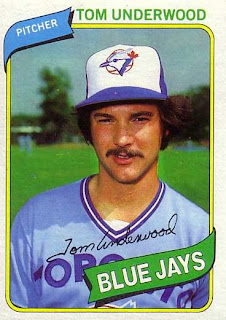 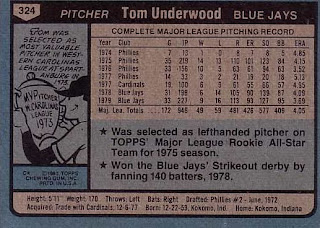 Who is this player?
Tom Underwood, starting pitcher, Toronto Blue Jays
When this card was being pulled from packs during the 1980 season, Tom Underwood was already long gone from Toronto. The lefthanded pitcher was traded as part of a package to the New York Yankees shortly after the 1979 season ended. He began the season in the bullpen to fill a role on the staff and did so well he remained there, much to his chagrin. When he returned to the Yankees rotation, he was their best pitcher, winning five straight starts. Nevertheless, he remained unhappy how he was used, despite winning 13 games for the AL East Champions.

The Kokomo, Indiana native was a three-sport athlete in high school, going 25-1 in American Legion ball and helped his team to a state championship in 1972. That attracted the attention of the Philadelphia Phillies who drafted him later that summer. Tom never had a losing season in the minor leagues and he made his major league debut in the summer of 1974. He was inserted into the starting rotation the following year and he had the best year of his career, winning 14 games and being named to the Topps All-Rookie Team. His performance that season led to predictions of stardom.

Underwood was never able to equal the performance of his first full season, despite being part of the Phillies 1976 NL East Champions. In fact, he was on the mound when the Reds clinched the NL pennant. Midway through 1977, Underwood was traded to the St. Louis Cardinals for Bake McBride, and he was subsequently dealt to the Toronto Blue Jays after that season. He pitched decently for horrible Blue Jays teams but Toronto saw him as a chip to trade for some veteran players.

After a rocky start to the 1981 season, he was traded to the Oakland A's. Pitching as a swingman during the second half he again appared in the postseason, this time with the AL West champions. The following year, Underwood put together an effective 1982 season. Again splitting his time between the bullpen and the rotation, Underwood forged a career best ERA of 3.29, won ten games, and saved seven others for Billy Martin, who liked his versatility and willingness to pitch in any role. Underwood played one more year in Oakland and another in Baltimore before his ten-year career came to an end in 1984.

Shortly after his retirement following the 1984 season, Mr. Underwood met his wife and began a second career as financial advisor for Wells Fargo Advisors. He was elected Howard (IN) County's athlete of the century in 1999 and was inducted into the Indiana Baseball Hall of Fame in 1997. Mr. Underwood fought a courageous battle with pancreatic cancer which ultimately led to his death in 2010. His daughter has a site dedicated to raising funds for cancer research where you can donate here


Why I love this card
Immediately, this card makes me think of May 31, 1979. Underwood faces his younger brother Pat, who was making his major league debut. Pat outdeuls Tom in a 1-0 decision. Pat was pitching for the Tigers, Tom for the Blue Jays. The local media made a huge deal out of this in Detroit and I always felt a little sorry for Tom. After all, in my nine-year old mind, Tom was the one that pitched the complete game.

Something else....
For most of the 1980 season, the New York Yankees had four lefthanders in their starting rotation: Underwood, Ron Guidry, Tommy John and Rudy May. I cannot recall any team that has done that since.
Posted by Dean Family at 8:47 PM