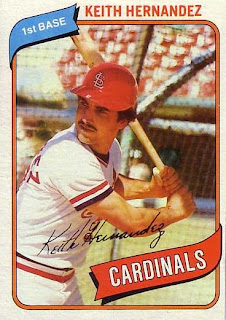 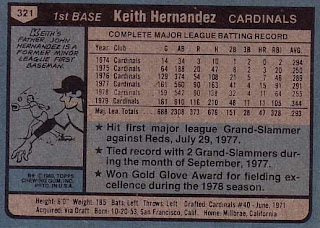 Who is this player?
Keith Hernandez, first baseman, St. Louis Cardinals
As one of the reigning co-MVP's in the National League, Keith Hernandez began 1980 by signing a new five-year contract. Hernandez was also the league's defending batting champion and he was again among the league leaders for nearly the entire season. He was selected to the National League All-Star team and finished the campaign with a sparkling .321 average, second in the league. He won his third consecutive Gold Glove, led the league in runs scored and on-base average and earned his first Silver Slugger Award. Amazingly, "Mex" was able achieve these accolades in a year that, by his own admission, he "went crazy" on cocaine.

The son of a professional baseball player, Keith Hernandez grew up in northern California where he was schooled in the game at an early age by his father. He matured into a star quarterback and first baseman in high school and was drafted by the St. Louis Cardinals in the 42nd round of the 1971 player draft. Initially, he struggled with minor league pitching, but he developed a reputation as an excellent fielder; one that would become his hallmark. His bat quickly came around and he was the leading batter in AA in 1974 and earned his promotion to St. Louis near the end of the season.

Keith earned a starting position in 1976 and again established a reputation as an excellent fielder with a steady bat. His breakout year came in 1979 when he won the batting title en route to an MVP season and consistently was one of the most feared hitters in the National League. In 1982, his clutch single in Game 7 helped the Cardinals win a World Championship against the Milwaukee Brewers. However, Hernandez's tenure in St. Louis suddenly and shockingly came to an end the following season when he was traded to the New York Mets. Later, it was divulged that he was traded dueto his (and the team's) cocaine issues.

With New York, Hernandez gave up the drug and helped lead the young Mets into contention in 1984. He was in the midst of 11 consecutive Gold Glove seasons and again helped a team to the postseason, this time the Mets, in 1986. Hernandez's veteran presence helped the Mets navigate a tough NLCS against Houston and another clutch hit in Game 7 of the World Series against Boston helped to break open the game and give New York its second championship. Hernandez and the Mets made a return to the postseason in 1988, where they were upset by the Los Angeles Dodgers.

Hernandez's cocaine issues became national attention during the summer of 1985 as part of the Pittsburgh Drug Trials. As one of the bigger "names" of the trial, his testimony was widely reported. When he estimated that 40% of major leaguers were using cocaine during that period, he came under fire and had to recant. Unfortunately, it became a significant part of his career that some believe may have kept him from receiving serious Hall of Fame consideration.

He left the Mets following the 1989 season and spent 43 games with the Cleveland Indians in 1990 before ending his 17-year career. In retirement Hernandez became even more popular than he was as a player, mainly due to his famous "Seinfeld" appearance and his "Just for Men" commercials with Walt Frazier. He has been a popular broadcaster since 2006 and despite a flap or two is respected for his keen knowledge of the game.

Why I love this card
OK, I'll be honest. I didn't love this card in 1980. I was a huge Willie Stargell/Pittsburgh Pirates fan and my nine-year old mind was unreasonably angry with Hernandez for the whole co-MVP thing. I had thought that Willie should have won out right and I selfishly blamed Hernandez. Yes, he won the batting title, but I didn't appreciate him at all at the time.

Something else...
Why did Topps give Hernandez card such an odd numbering? As an All-Star and MVP, usually guys like that got a card with a number ending in 0 or 5. It seems odd to give a player of Hernandez's caliber such a common number. Keith also had a Topps Super issue and a Burger King card which are pictured below. Which makes the numbering thing of his primary card all the more puzzling. 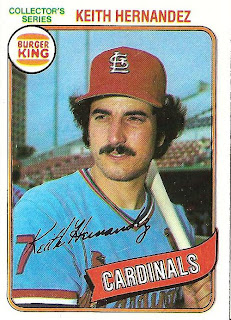 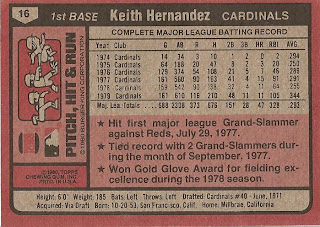 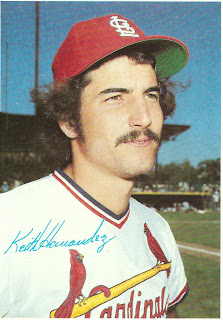 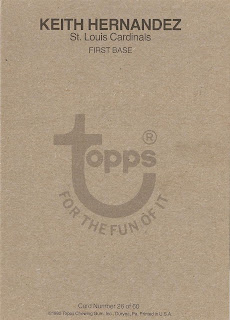