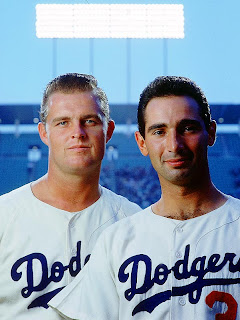 Disclaimer: This post has nothing to do with the 1980 Topps set, rather a small baseball tale that my father talked about for much of my life. Periodically, I will include these as a tribute to the man who started my card collection and my interest in the game.

In the history of baseball, there may have been no greater pitching twosome than Sandy Koufax and Don Drysdale. These two future Hall of Famers dominated the much of the 1960s en route to three World Championships in seven seasons and accolades too numerous to mention.

However, my Dad insisted that he saw both of them get beat in the same day. And not early in their careers, mind you, but in their prime. Occasionally, I would press him for details about the game or what year this may have happened, but they were sketchy. Some facts did remain constant. The Pittsburgh Pirates won both games at Forbes Field. One of the games went long. Vern Law pitched. But most importantly, both Koufax and Drysdale were the losing pitchers of record and they were in their prime.

For years, this event remained a mystery to me. A mystery, until Retrosheet came out. Through the magic of this incredible site, I was able to fill in the blanks.

The date was Wednesday, September 1, 1965. The place was Forbes Field in Pittsburgh. My Dad was 24 years old at the time and was visiting his family in Clairton, PA. He had left the state and come to Michigan only three years before. But on this day, he was one of the 26,394 to witness this historic event.

In the first game, Koufax started for the Dodgers against Tommie Sisk. Koufax was in the midst of a unanimous Cy Young season while Sisk would make only twelve starts for the Pirates. Despite giving up two early runs, Sisk buckled down and the Pirates managed to scratch across a pair to tie the game. Sisk turned things over to Joe Gibbon in the sixth and he matched Koufax pitch-for-pitch. The game stretched on to the 11th inning, when with two outs, Willie Stargell walked. Pirate catcher Jim Pagliaroni doubled to score Stargell and win the game for Pittsburgh.

Despite the loss, Koufax was still the star of the game. He struck out 10 Bucs and in the process, broke his own single-season National League strikeout mark. He would go on to set the major league record later that year with 382.

In the second game, the Dodgers again jumped out to an early 1-0 lead. Pirate ace Vern Law settled down after that and shut Los Angeles out for the remainder of the game. Bill Virdon tied the contest with a homer in the sixth and scored the go-ahead run in the eighth when Maury Wills bobbled Manny Mota's grounder (yes, Mota was with the Pirates).

Virdon and Roberto Clemente each had three hits in the game as Law went the distance to earn his 16th win of the season.

While I haven't done the research, just seeing two Hall of Famers of this caliber on the same day is something special. Thanks for sharing the memory, Dad.
Posted by Dean Family at 2:15 PM