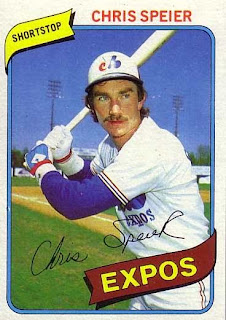 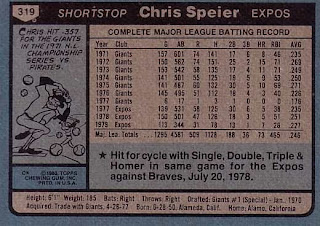 Who is this player?
Chris Speier, shortstop, Montreal Expos
The 1980 season was one of ups and downs for Montreal Expos shortstop Chris Speier. He lost his starting position in late April when he wasn't hitting and wasn't sharp defensively. After nearly a month on the bench, he returned with a flourish, going 11 for 16 with a triple in and five RBI over a five game stretch. He slumped again over the summer due to a finger injury, and at one point his average dipped to .228. But Chris was consistent in the field and as September came, he helped the Expos surge towards the NL East flag. Speier batted .348 during the month as Montreal stayed in the race until the final weekend of the season.

A native of Alameda, California, the righthanded hitting Speier was drafted by the Washington Senators out of high school but turned it down for a chance to play in college. He starred at the University of California, Santa Barbara which caught the attention of the San Francisco Giants. They selected Chris on the first round of the 1970 draft. He played only one season in the minor leagues where he was a Texas League All Star. The next year, he was handed the starting shortstop position and he appeared in 157 games as the Giants won the NL West pennant. Speier batted .357 in the NLCS, including a home run, but the Giants were defeated by the Pittsburgh Pirates.

In the early days of his career, Speier was a star; three times being selected to the National League All Star team and even making the cover of Sports Illustrated. He had a reputation as a fiery competitor and was one of the best glove men of his era. Speier had a knack for consistent clutch hitting, batting .314 for his career with the bases loaded. After six full seasons in San Francisco, Speier was traded to the Montreal Expos shortly after the 1977 season began in exchange for Tim Foli.

Speier would go on to spend eight seasons in Montreal, all of them as their starting shortstop. He would hit for the cycle as an Expo uniform in 1978. In 1982, Chris' set a franchise record for RBI in a game with eight. He enhanced his reputation as a fine fielder by consistently placing among the league leaders in putouts and fielding percentage. Chris again appeared in the postseason in 1981 as he helped lead the Expos to an elusive NL East crown and NLCS appearance.

Towards the end of the 1980s, Chris became a journeyman infielder, traded to St. Louis, Minneosta. Chicago (NL) and back to San Francisco to round out his 19-year major league career. It was during this time that Speier again hit for the cycle (1988) and was a member of the 1987 and 1989 NL West championship teams. After his playing days, he became a coach and manager at both the major and minor league levels. He was the third base coach for the 2001 World Champion Arizona Diamondbacks and currently is the bench coach for the Cincinnati Reds.

Something else....
Chris' son Justin has pretty together a pretty decent career. The 12-year veteran has played for seven clubs, mostly as a middle reliever. He is currently with the Los Angeles Angels. Additionally, in 1993 Speier served as principal of Ville de Marie Academy, a parochial school in Scottsdale, Arizona.

On this date in 1980:
The Top 40 in popular music was released today, the #1 song in the country was "Magic" by Olivia Newton-John. The complete list can be found here.
Posted by Dean Family at 10:23 PM