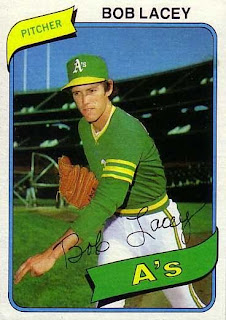 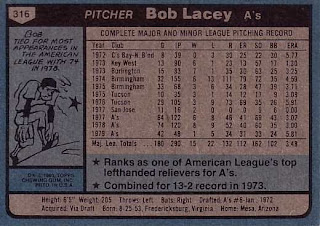 Who is this player?
Bob Lacey, closer, Oakland Athletics
In 1980, Bob Lacey may have been the least used closer of the modern era. While Lacey appeared in a team-high 47 games, finishing 31 he only earned six saves. This was due to Oakland's record-setting starting pitching. In what will likely never be duplicated in today's game, the A's pitched an astonishing 94 complete games in '80, leaving little left for relievers like Lacey. This eventually led to friction with his manager Billy Martin over how he was used. Martin did give Lacey his first ever starting assignment near the end of the season, and he blanked the Milwaukee Brewers. Naturally, it was a complete game.

Colorful. Flake. Eccentric. All of these words and more were used to describe Bob Lacey during his major league days. Like most pitchers with that description, Lacey was a lefthander that once struck out 19 batters during an American Legion playoff game as a youth. He was a late round draft selection of the Oakland A's in 1972, and while he was 13-2 in his first minor league season, he floundered in the minor leagues. However, as the A's dynasty began to crumble as the decade wore on, Lacey found himself given an opportunity at the major league level during the 1977 season.

In just his fourth major league appearance, he struck out future Hall of Famer Reggie Jackson twice in crucial situation, enraging Jackson and the Yankees in the process. Later, he would engage in a brawl with the Kansas City Royals' Darrell Porter, who called Lacey a "crazy, immature, punk." Despite this, he emerged as Oakland's most reliable relief pitcher and led the American League in appearances in 1978.

No other pitcher in league history inherited more baserunners than Bob Lacey did in 1978 (104). Despite that, he won eight games, crafted a 3.01 ERA and saved five games. He had a disappointing 1979 season suffering with bursitis in his heel, but then again, so did the A's as they lost 109 games. He fell out of favor with Martin and he refused to use Lacey at all during Spring Training. In fact, legend goes that Martin went so far to bar anyone from even playing catch with Lacey. Eventually he was traded to the San Diego Padres in late March. He was with the Padres for three days who in turn traded him to the Cleveland Indians.

Lacey split time between the Indians and Rangers in 1981 and pitched for Satillo in the Mexican League in 1982. He was a late-season call up for the California Angels in late-1983 and pitched in relief for the San Francisco Giants in 1984. He bounced around the minors for the 1985 season before pulling the plug on his seven-year career. He made a comeback of sorts in the late 1990s as manager of the Greensville Blusemen. Not content to just the dugout, Lacey appeared in eight games of relief over the 1998 & 1999 seasons, four games each year.

Why I love this card
What a great pose! I can't figure out exactly what Lacey is doing....pointing to a quarter on the ground? Throwing a paper airplane? Admonishing a small child? Whatever it was, it didn't fit the "traditional" pitcher pose, which I guess is typical regarding Lacey. Added bonus points to "FACE" printed across his mitt.

Something else....
One final story regarding Lacey. Apparently he gained too much weight during the 1981 Player's Strike. When asked how he would get back into playing shape, Lacey replied that his plan would be to drive his car with the windows rolled up and heat turned on full blast. With the August heat, Lacey rationalized, he would have a sauna on wheels.

On this date in 1980
Montreal Expos manager Dick Williams wins his 1,000th career game, 11 - 5 over the Mets, at Olympic Stadium. He is 3rd in wins among active managers behind Gene Mauch and Earl Weaver. The Expos overcome the offense of Doug Flynn, who ties the modern major-league record with three triples.
Posted by Dean Family at 10:36 PM