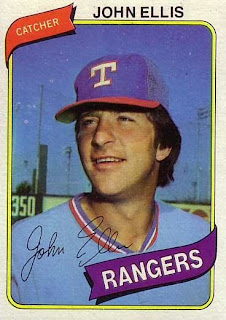 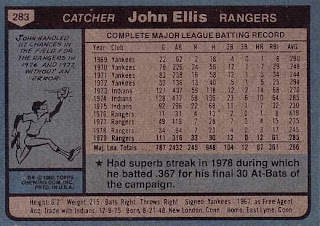 Who is this player?
John Ellis, utility, Texas Rangers
Although he started at first base for the Texas Rangers on Opening Day, John Ellis spent much of the 1980 season in a reserve capacity. When he found his way into the starting lineup, the righthanded hitting Ellis usually faced lefthanded pitching. His only home run came against Kansas City Royals' ace Larry Gura, and he had a three-hit, two RBI performance against the Oakland Athletics. A strange moment occurred in early June when Ellis and several Rangers teammates were involved in a melee with Chicago White Sox fans outside of Comiskey Park. An unrelated bone bruise put him on the disabled list and he missed three weeks of action.

While he once claimed that he grew up in a pool hall, John Ellis was a standout football and baseball player at New London High School in Connecticut. A solid 215 pounds, he was drafted by the New York Yankees in 1966 as a catcher. After hitting .333 at Triple A Syracuse, the Yankees called him up in 1969. Despite hitting nearly .500 in Spring Training 1970, Ellis' path was blocked by another Yankee catching prospect, Thurman Munson, who won Rookie of the Year honors that year. Ellis settled in as Munson's apprentice, occasionally playing first base. He performed well enough to earn a spot on the Topps 1971 All-Rookie team.

Ellis' career was also interrupted several different times due to injuries. He was traded to the Cleveland Indians in 1973 in a deal that brought Graig Nettles to New York. John spent two seasons as a regular player, thanks primarily to a rule change. John was the first designated hitter in Indians' history and it allowed him to get more time in the lineup. Unfortunately, he had disputes with Indians manager Frank Robinson and he was traded to the Texas Rangers for 1976. Ellis spent six years in Arlington, playing a variety of positions until his 13-year career came to an end in 1981. He earned a reputation as a hard-nosed player with a knack for coming through in the clutch.

Ellis joined the Spalding Sporting Goods Advisory Staff in the mid-1970s, and had a signature catcher's mitt sold in sporting goods stores. He also had his real estate licence and opened a real estate business. Today, he serves on the board of the Connecticut Sports Foundation Against Cancer, an organization he helped found in 1987. Ellis has lost his brother, sister, and sister-in-law to cancer all before the age of 40, and he also is a cancer survivor.

Why I love this card
I didn't know anything about John Ellis when I got this card. At the time, just a mere glance in searching for the stars of the day. If anything, I was more intrigued about what the structures were on the other side of the left-field wall.

Something else....
In 1975, Ellis had an excellent opportunity to score the one-millionth run in baseball history. Moments before Bob Watson accomplished the feat, Ellis was on third with slugger Boog Powell at the plate in a game against the Baltimore Orioles. Powell struck out, leaving Ellis stranded at third.

On this date in 1980:
In keeping with the movie themes this week, "The Shining" was released on this date. I didn't know anything about Jack Nicholson at the time, but this image scared the devil out of my sister and I for probably two years. I'm over it now. Kinda. 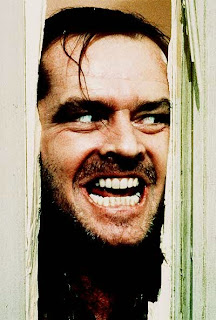